Our original plan was to leave Letchworth on Thursday and spend the day at the Corning Museum of Glass, because the forecast looked rainy on that day. The forecast shifted, giving us a sunny and warm day on Thursday and rain Friday. I didn't want to spend the nice day indoors, so we went straight to Watkins Glen, checked in at the campground, and headed to Watkins Glen State Park. This was the Thursday prior to Memorial Day weekend, and when I tried to get a campsite at Watkins Glen State Park for this weekend back in October, all the W/E sites were already gone. So we ended up at the KOA instead.

Watkins Glen State Park is a little different than the most state parks. It's literally right there in town. In fact, it's so in town I was confused and passed by the parking lot a couple of times, assuming a parking lot on the main drag through town couldn't be the state park.

However, once you get into the park it is a natural wonderland. The Watkins Glen Gorge is about a 1 mile walk, and in that one mile is about 700 steps, a dozen waterfalls, and indescribably amazing canyon scenery. A pro tip that I figured out too late - park at the South entrance, take the rim trail to the left and follow it one mile to the last set of steps down into the gorge. Then walk back to the south entrance, going down all those stairs instead of up. I went up all the stairs, but I was so into the scenery I really didn't notice. After that we wandered around downtown Watkins Glen a bit, finally settling in at an outdoor table at a taphouse for a couple of brews and dinner. Dinner was mediocre and overpriced. There was nobody at the KOA on Thursday night and we literally had the entire campsite section we were in to ourselves. That would not be the case for the weekend. 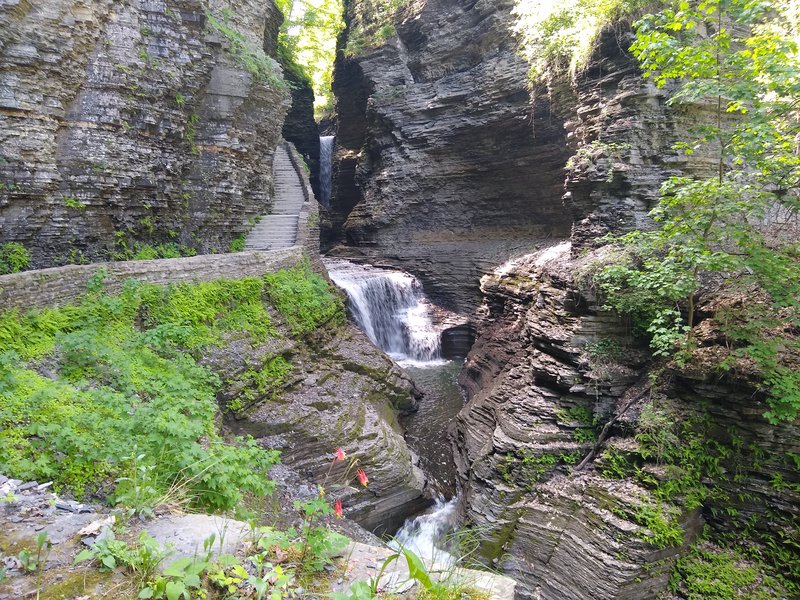 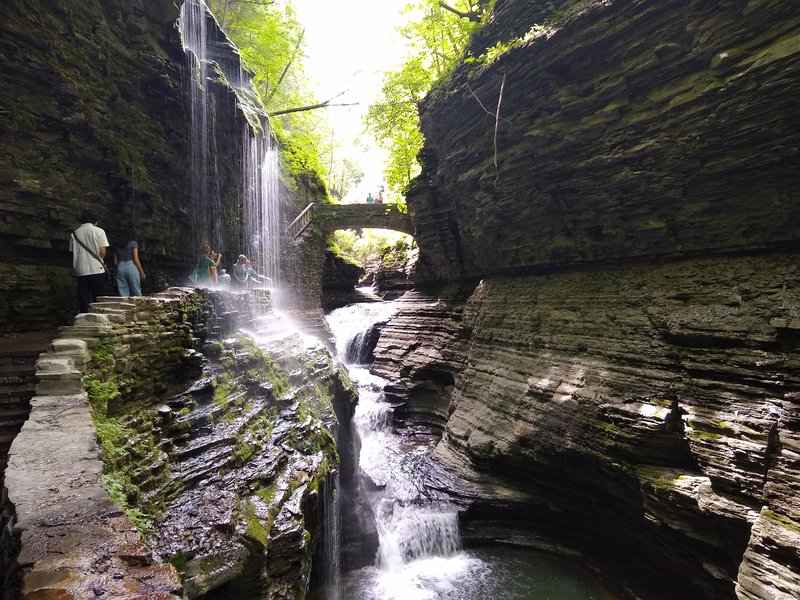 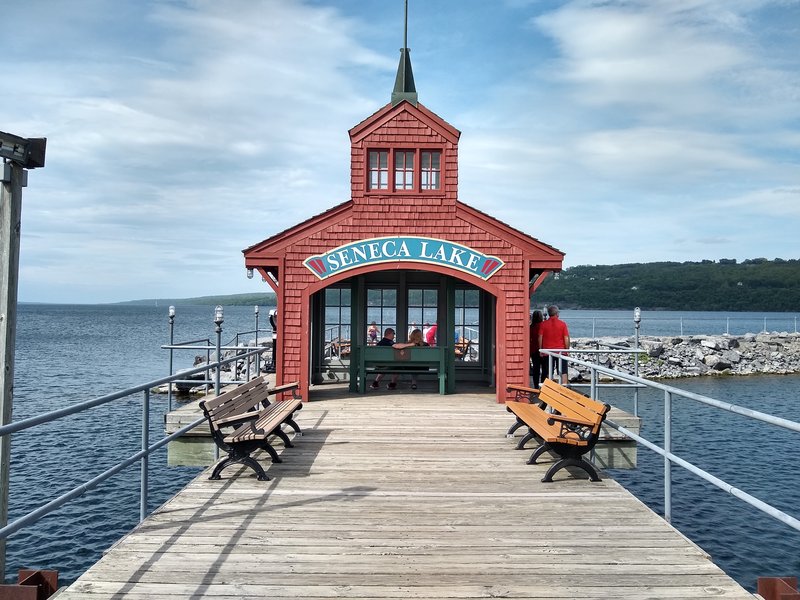 Friday morning we headed into Corning NY for the Corning Museum of Glass. We had 10 AM entry tickets and left around 3:30 PM, not because we were done with the museum, but because we were done. There is so much to see there that we simply could not accept anymore input into our brains at 3:30. We could have easily come back the next day and spent a few more hours. The ticket is good for two consecutive days for only $20, which is an amazing bargain given the depth and breadth of the museum's collection. We actually had combo tickets that included the Rockefeller Art Museum down the street, so we headed there next.

The Rockefeller is a smallish gallery holding the personal collection of a rich guy named Rockefeller, but not one of those Rockefeller's. The collection was mostly 19th century western art, which they enhanced by adding native American art over the years. I was mostly struck by the differences between how white artists portrayed native Americans versus how native Americans portray themselves. Also, there was an exhibit by an amazing sculptor, Michael Naranjo. He lost his sight in the Vietnam War, but that didn't stop him from becoming a sculptor.

The employee at the Rockefeller Gallery complimented my Iron Maiden t-shirt, so I guessed correctly that she would be a good person to ask about nearby brewpubs. I was not wrong with that guess and we enjoyed a dinner that was 1/2 the price and much better than the previous night. We returned to the KOA, where our peaceful empty corner of the campground was completely overrun with campers. I'm not exaggerating when I say we could hear conversation from at least six campsites when sitting at ours. It turned out fine as everybody near us was respectful of quiet hours and other than the annoyance of feeling like we were sharing a campsite with all these folks, it was fine. 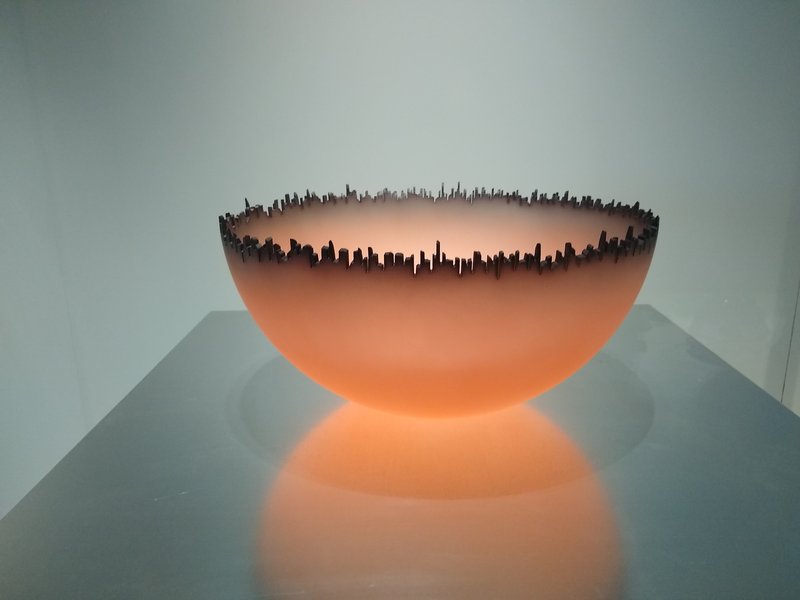 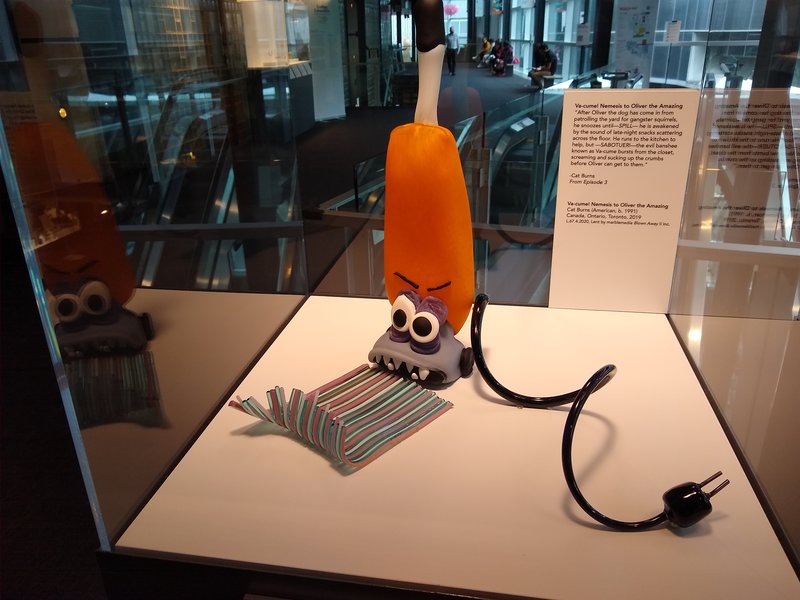 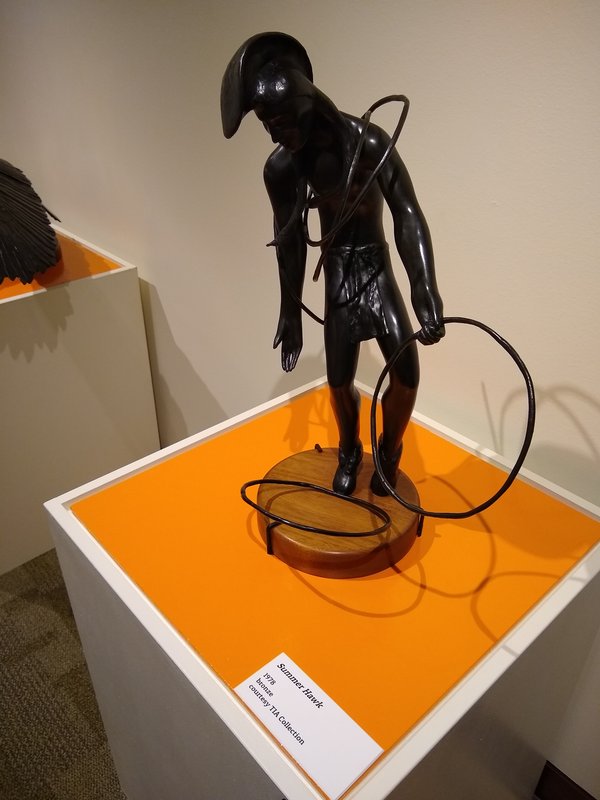 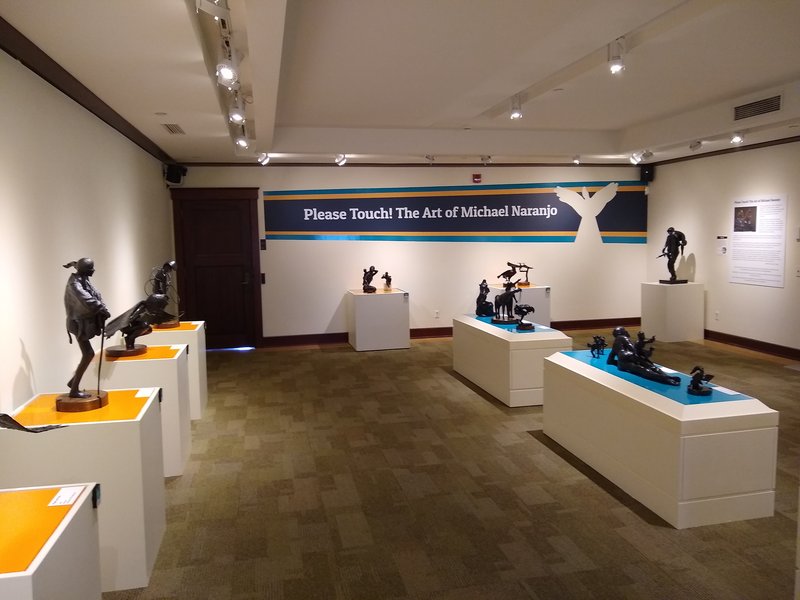 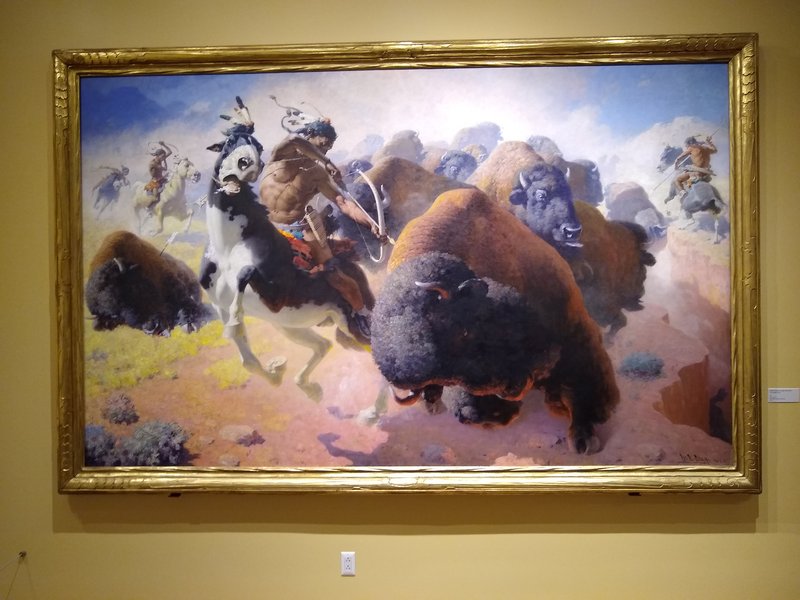 Saturday was our final day in NY. It was raining when we got up but we proceeded with our plan to explore Ithaca NY. We started at the Cornell Ornithology Lab, as we both have become beginner birders over the last year. The website indicated they were doing tours of the labs but apparently the website was wrong. But we still had a good time exploring the public areas of the labs, chatting with the volunteers, and doing a little birding from the indoor overlook of a pond, as it was pouring rain. From there we headed to the Ithaca Commons, an pedestrian mall / shopping area where we found a waffle shop for lunch, browsed a really great used bookstore, and Michelle found some bargains at a going-out-of-business sale at a 2nd hand clothes store.

By then the rain had ended so we headed out to explore the local waterfalls and wander the Cornell campus. However, it turned out to be commencement day at Cornell so everything was packed and many roads were closed. We made it to one waterfall and in doing so randomly drove by the famous Phi Sigma Kappa house there. It was long considered to be the best looking Phi Sig house in the country, but I think that reign ended in 2018, when our new house at Purdue opened ;) With everything in town overrun with new graduates and their families we decided it was a good time to head back to Watkins Glen and find a better brewpub than the one from the first night. It turns out there are no other brewpubs in Watkins Glen, so we ended up at a sports bar instead, where I quietly rooted against Liverpool in the Champions League final, in a bar full of Liverpool supporters. 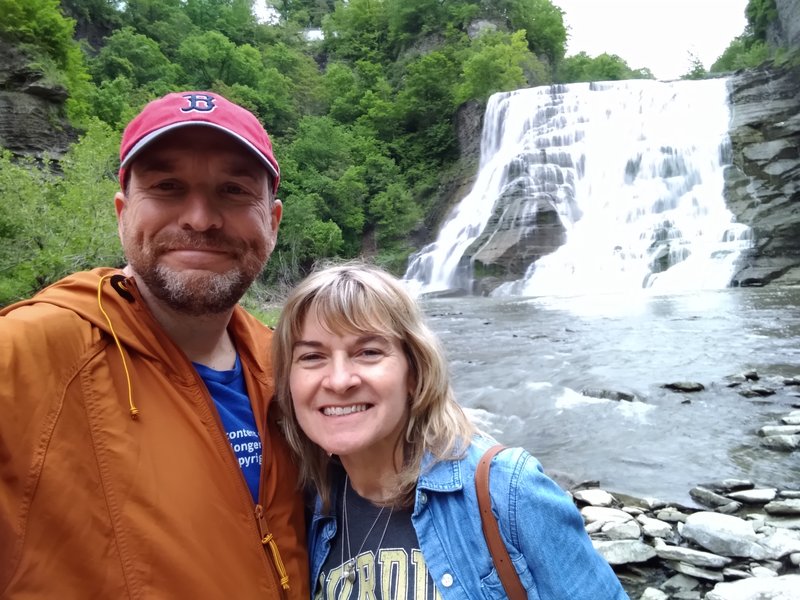 That evening we hung out at the campfire a bit and packed the car to get a head start on heading home the next morning. When we left the next morning I finagled Google Maps to force it to send me home the western route, avoiding I-95. That put us in Williamsport PA. As we were driving Michelle checked and the Little League complex is open on Sundays, so an unplanned stop was made. We spent about 90 minutes in the museum and wandering the complex before continuing our journey home. 42 years after my Little League career ended I finally made it to Williamsport :) The rest of our journey home was uneventful. 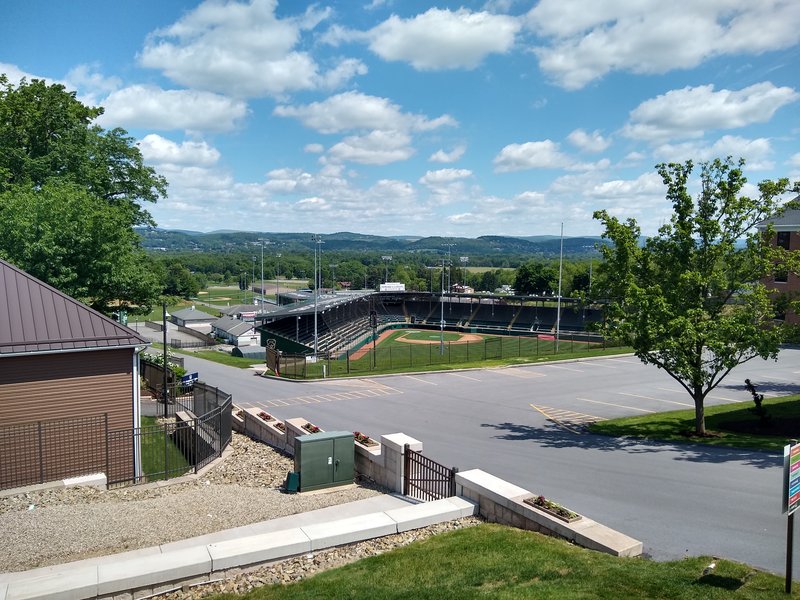 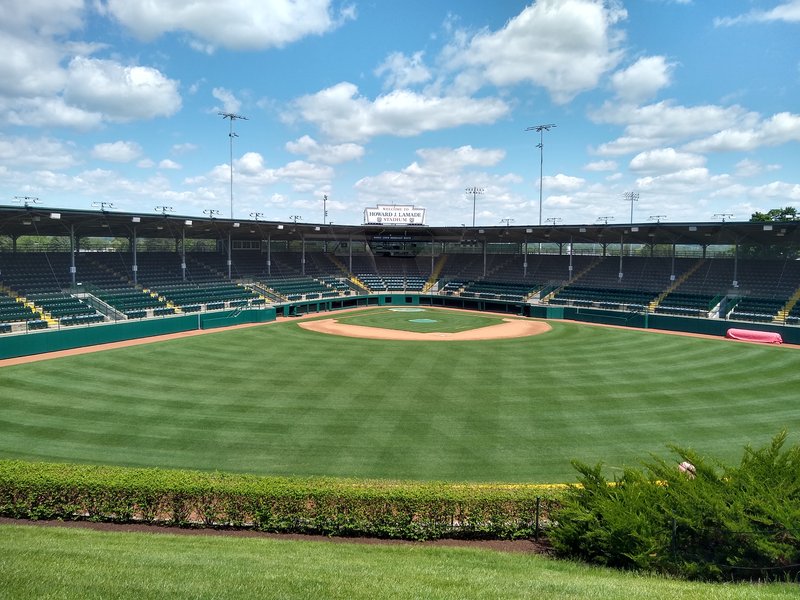 And that's a wrap on the Spring trip. We have camping planned pretty much every other weekend all summer, cumulating in a week in Maine in September. So they'll be plenty of camping updates here.