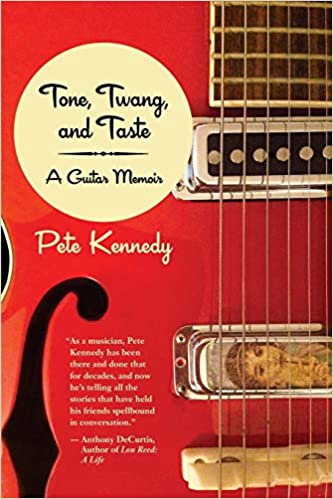 Pete Kennedy is a roots music troubadour, capable of playing anything and everything. Just check out The Kennedy's on their every Sunday afternoon YouTube stream for a taste. But like everybody his age, he started by air guitaring Beatles's tunes with a tennis racket.

His book picks up with his discovery of the Beatles and take us on a tour of his life in music. And what a life it has been. He has played with everybody from Bob Hope and Frank Sinatra to Stevie Wonder to Andrew Lloyd Weber to touring long term with Mary-Chapin Carpenter and Nanci Griffith. He's played every dive bar in DC and he's been both on the stage and in the pit at the Kennedy Center. And that's all before he met Maura and they became The Kennedys.

I have zero doubt that Pete could have been a rock god, touring the country in a private jet playing to 20,000 drunk and stoned teenagers a night. But he chose a different path, and this book is the story of that path. You get to follow him through the dusty back roads of roots and Americana music. You get to tag along with a working union musician as he jumps from one-off studio gigs to being in the orchestra for a musical at The Kennedy Center to playing a wedding, sometimes all in the same day. If nothing else, you'll learn how much work it is being a cool local guitarist and folk-rock legend.

In the book he references all the times he's been asked why he didn't "make it big." His answer is that nobody that has seen "making it big" up close would ever choose that life. He's as big as he wants to be. Ultimately this is a story of building the life you want with the people you want to spend time with. It's just that his life involves playing guitar with some of the most notable musicians around, so it seems so much cooler than, I don't know, a life in tech sales or something.