I should have spent last week in TN hiking Civil War battlefields with my son. However, Hurricane Delta had other ideas and the forecast for the first 3 days of a 6-day trip was heavy rain 24 X 7. So we bailed. We decided to get out this weekend instead as it was perfect camping weather, cool days and chilly nights. Finding a campsite with one week’s notice in peak fall camping season was a challenge. I finally found a spot at Middle Creek Campground. It’s fine - a commercial campground with all the usual amenities, including being close enough to your neighbors that you can have a conversation across camp sites. Our campsite backed up to the creek, so that was nice. I really need to branch out and camp more without hookups as it’ll give me a lot more flexibility, especially on short notice. 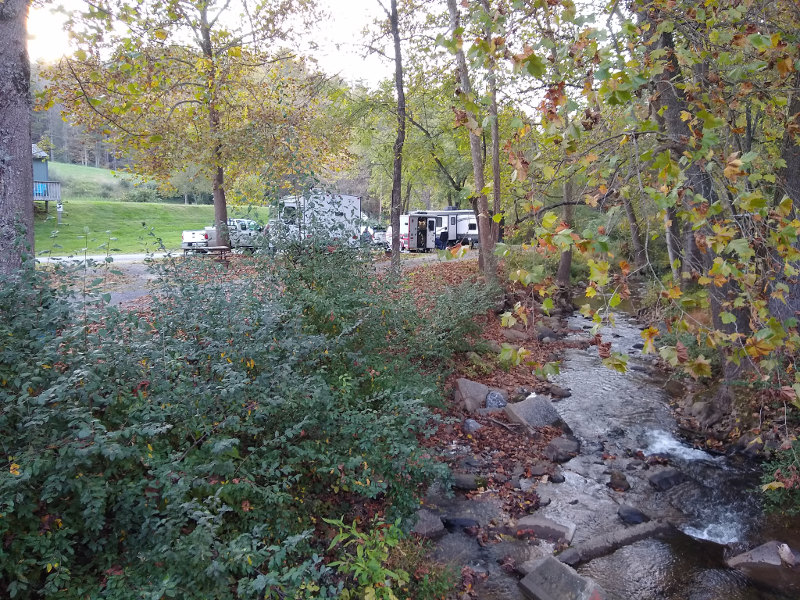 Friday night was sit around the campfire and enjoy a couple of beer night. However, it dropped into the upper 30s rather quickly, so we retreated inside about 9 PM for board games.

Saturday we headed to the Peaks of Otter area of the Blue Ridge Pkwy. The hike to the summit of Sharp Top summit is only about 1.5 miles, but you go up 2000 feet in the 1.5 miles. The view from the top is worth it. During WWII a B-25 on a training flight crashed into the side of the mountain, in an area so remote that they couldn’t remove the wreckage, so it’s still there today. The location is not highly publicized, but Google will turn up a web page with the GPS coordinates of the debris field. The trail to the plane debris barely exists, you mostly bushwhack your way about ½ mile down the side of a very steep mountainside to get there, meaning up also have to go back up! I took a nasty fall and sliced up a leg pretty good while exploring the debris field. However, it was only a minor annoyance because I always have a first aid fit in my backpack, so I could patch myself up. Let that be a lesson to you kids. People have died within a hundred yards of major trails because nobody could find them. Always hike with first aid supplies, and always be prepared to spend the night if you are venturing into the wilderness.

We are parked down by that lake 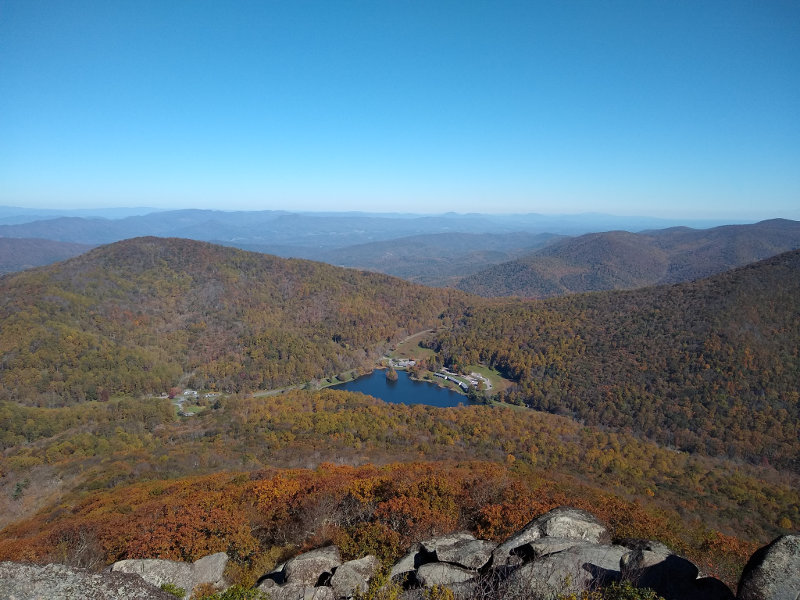 From the summit of Sharp Top Mountain 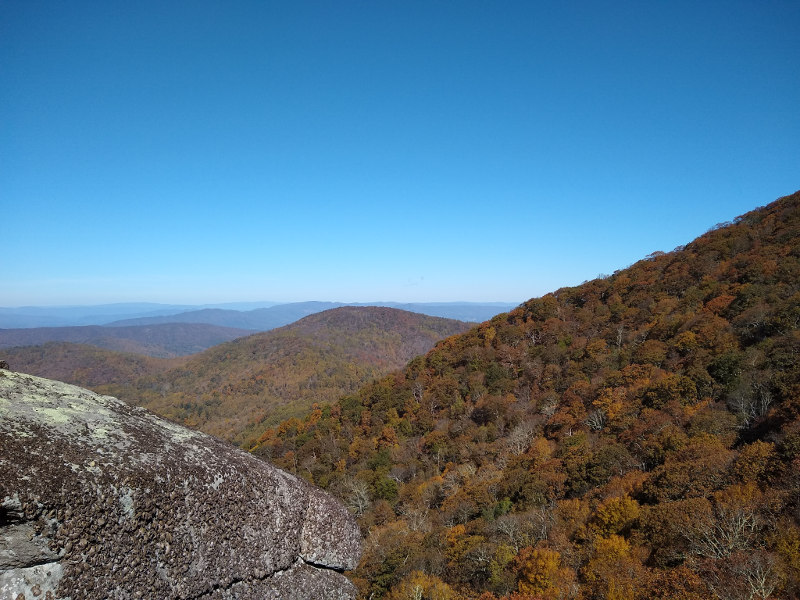 Obligatory selfie on the summit 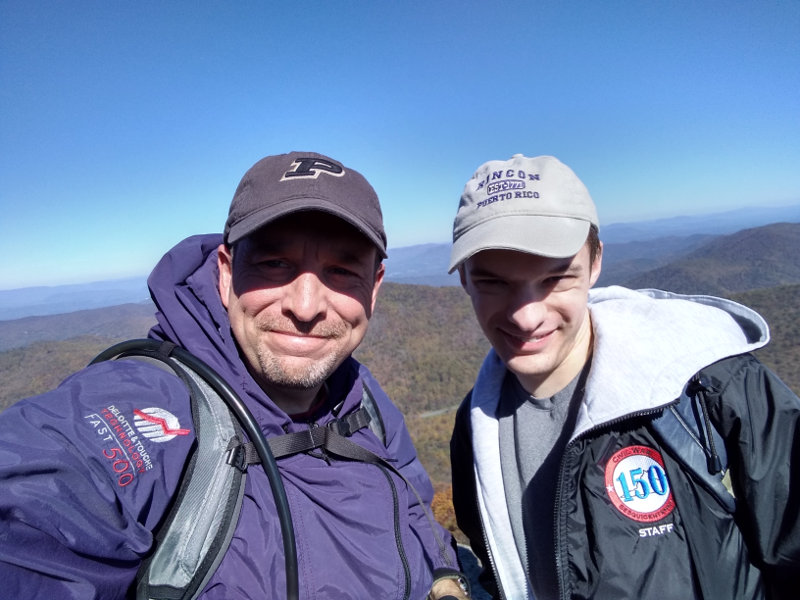 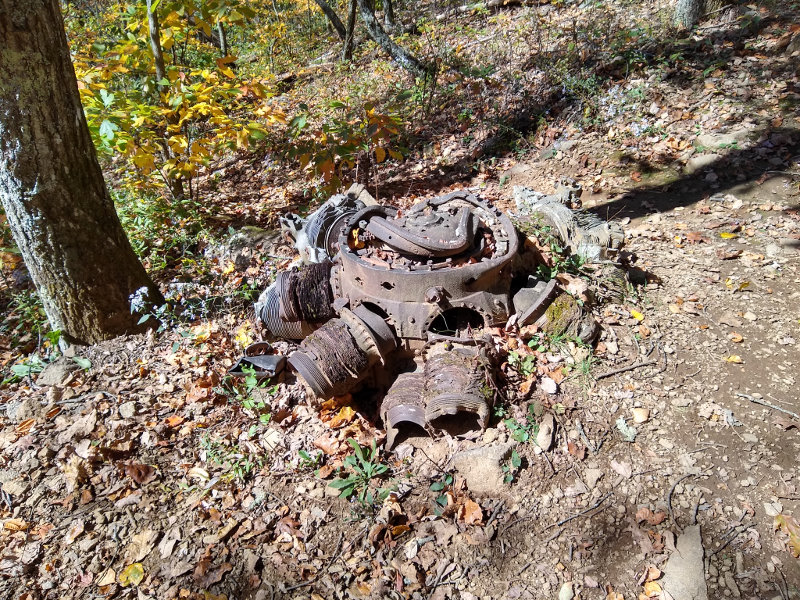 Memorial for the 5 airmen that died in the crash 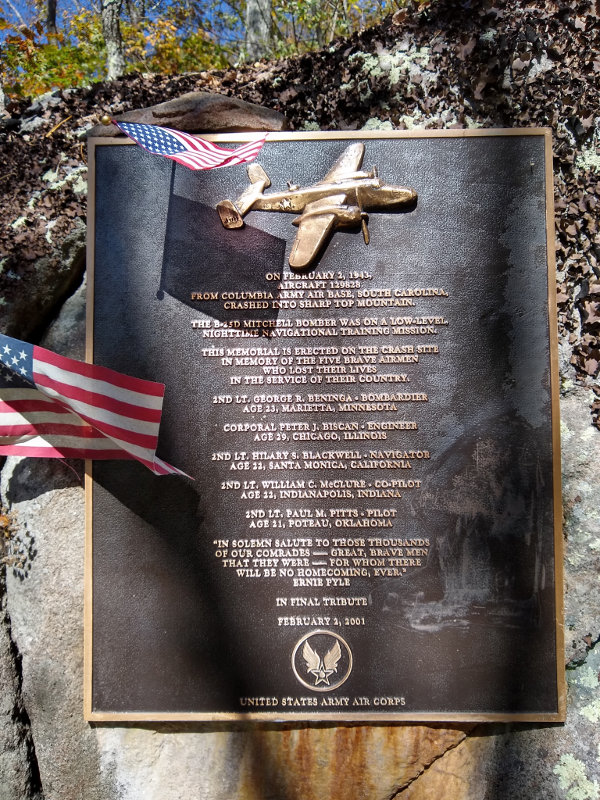 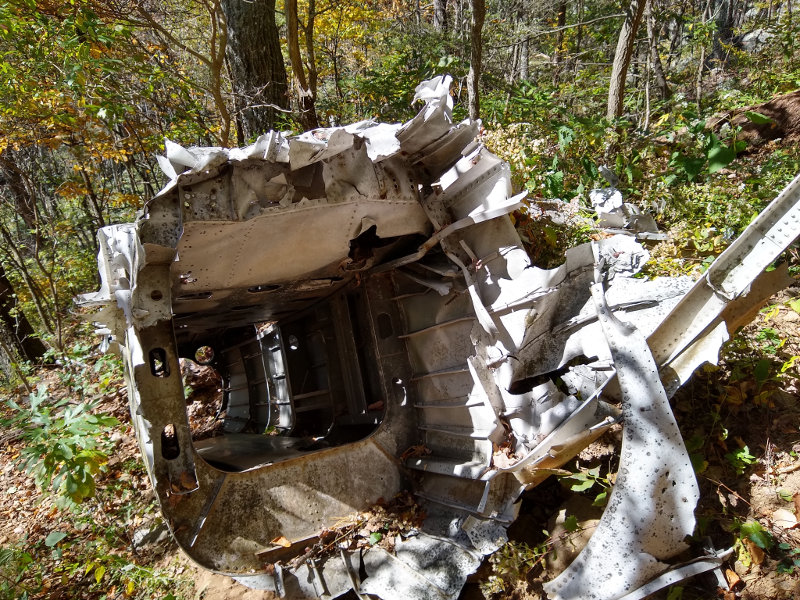 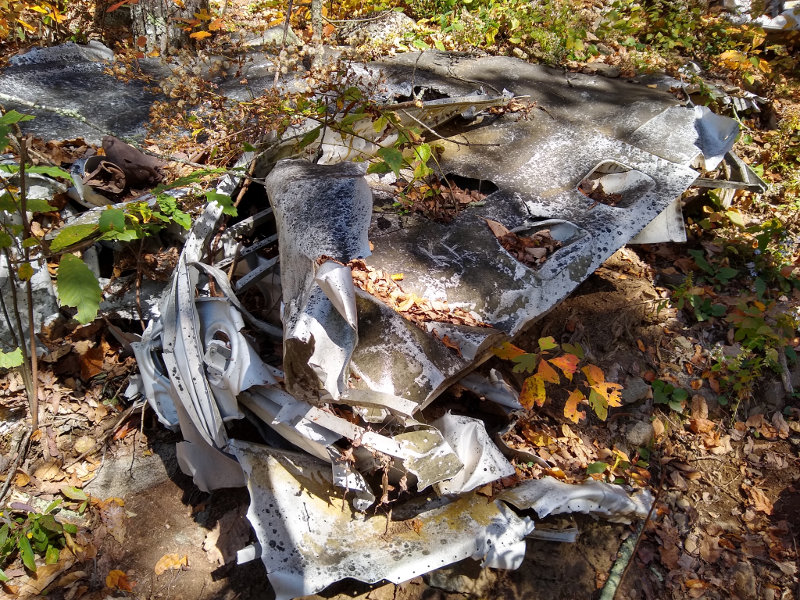 Saturday night was also sit around the campground and enjoy a couple of beers night, except that it got cold earlier, so we put out the fire and it became hang out in the camper and enjoy beers while watching college football night.

Sunday we took the scenic route home. We went to the Otter Creek campground on the Blue Ridge Pkwy, because I knew it was closed, so I knew I would be able to park the camper there. We did a six-mile lollipop hike from the campground south the Otter Creek Lake, circling the lake and then returning to the camper. It’s a nice hike, relatively level and you are right along the creek for the majority of the hike. On the return leg we ran into an older couple with a cute dog. We stopped, intent on saying hello and petting the dog for a second. The woman greeted us with the demand that we back up to a wider spot in the trail, so they could pass. I’m not sure what kind of greeting I was expecting, but “Get the hell out of my way” was not it. I probably should have responded with "You shall not pass" in my best Ian McKellen voice. Breck suggested I’ll be yelling at the kids to stay off my trail when I’m old. I don’t think so.

My daughter in the upper Midwest sent me a photo today of the snow on her car. I responded with this photo of our lunch spot. 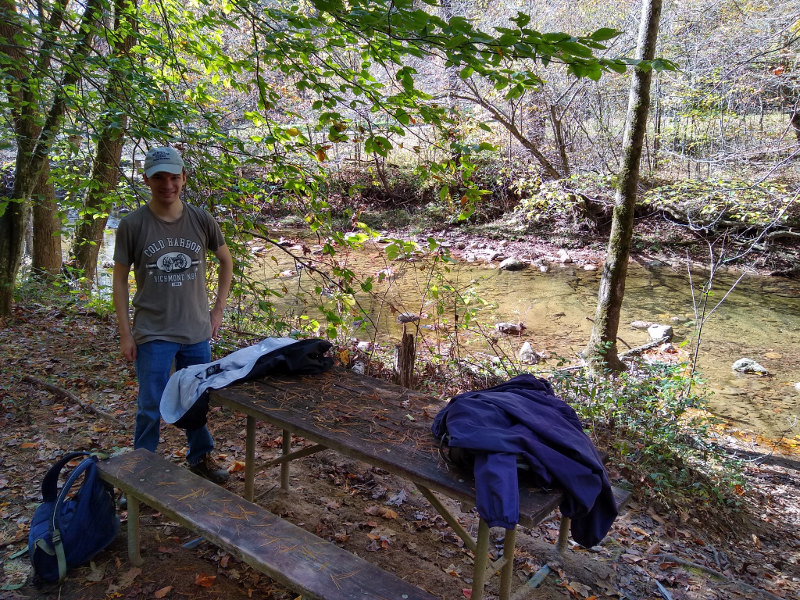 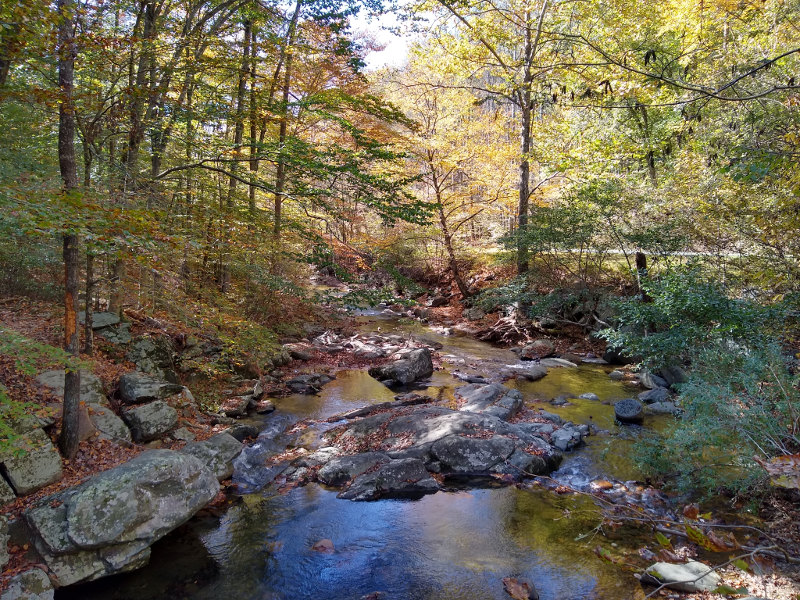 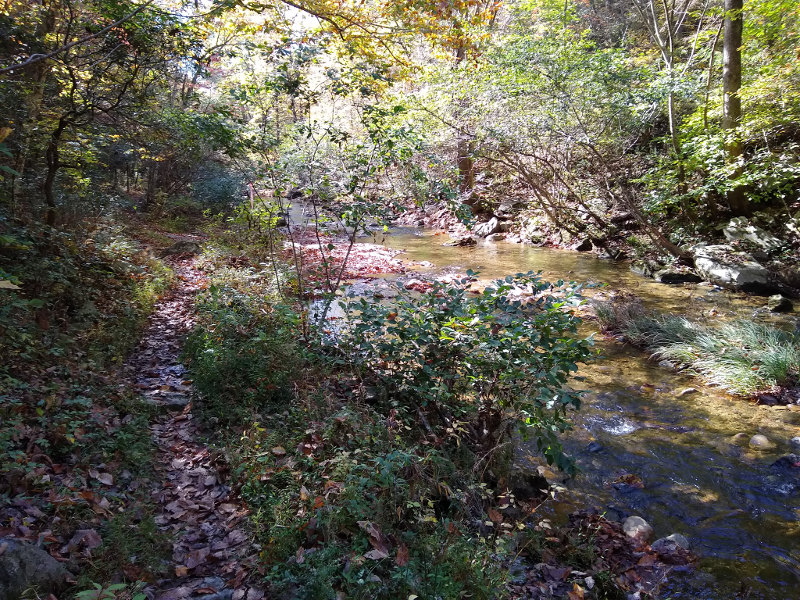 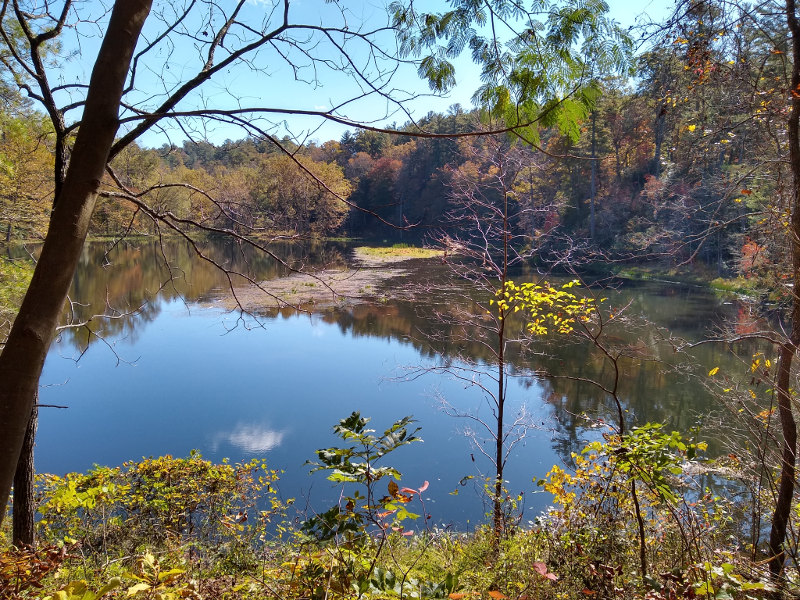 After the hike we took the scenic route home by following the Blue Ridge Parkway almost all the way back to I-64. We intended to celebrate a great camping weekend with a beer at Blue Mountain Brewery. However, the brewery was a madhouse, with cars parked on the side of the road for 100 yards each side of the parking lot entrance, so we just kept on going and continued home.