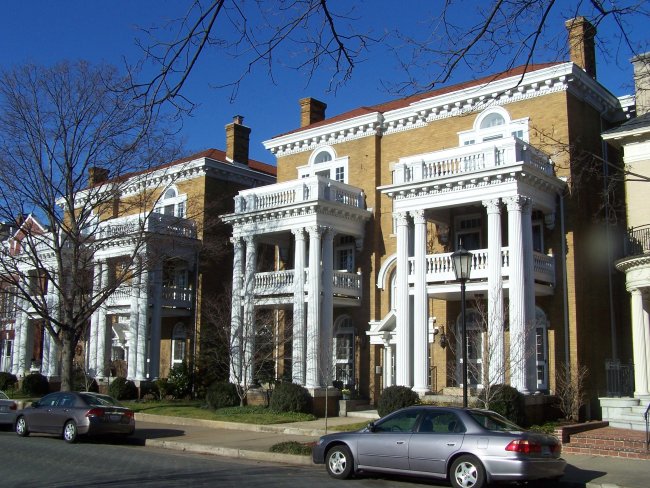 I had some time to kill in Richmond today, so I took a walk with my camera down Monument Avenue in Richmond VA. Monument Ave is generally considered one of the best streets in any city, due primarily to the 6 large monuments to Southern "heroes" (traitors) that dominate the streetscape. I've driven through the area several times. This was the first time I ever parked the car and walked the entire area, which is about 1.5 miles from the Jeb Stuart monument to the Arthur Ashe monument.

First of all, Monument Ave may be technically cobblestone, but it is not the quaint narrow cobblestone street that you are probably envisioning. The cobblestone surface is very smooth, the road is 2 lanes each way, with a 30 mph speed limit that is ignored. Most cars are doing about 40 through there. The locals use the wide grassy median as a park, hanging out and picnicking. On previous drives through, I always thought the stately houses were really pretty. And they are nice, but when you are walking you can see that many of them are really apartments, and judging by the number of craft beer bottles I saw littering porches, populated by a party happy crowd. It's promoted as an old money kind of neighborhood, and the actual single family homes here probably qualify. But a lot of it has been turned into apartments that appear to populated by the 20-something party crowd.

If you are wondering how an Arthur Ashe monument ended up on a street with monuments to 5 traitors, you aren't alone.

September 2021 update - With the news that the Lee Monument is finally coming down this week, this post is quite an artifact now. I did not live in Richmond when I wrote this. We lived about 60 miles North.