On Wednesday we packed up and made the one-hour drive to Gatlinburg. We stayed at the Greenbriar Campground, wedged between two Class A RVs. It makes for a funny picture, but I really don’t get why somebody spends $385,000 (base price of the RV on the right) to basically never come out of the RV. No campfires, no cookouts, nothing. He had adult kids also at the campground, and we saw him drive the John Deere over to them once or twice. The campground wasn’t large enough to need a golf cart for anything. I circled the entire campground on a walk in about 10 minutes. We were right on the river, the bath house was quite nice, and the wifi was usable. So not the worst campground to use as a home base to explore the National Park, but it was probably the least friendly campground I’ve been to. It just had a vibe that I did not like. Michelle overhead two moms with 15 kids between them (not a typo) complaining that the bath house was insufficient for their needs, and they were late getting to Dollywood while they tried to get 15 kids showered. You can imagine just how little sympathy I felt upon hearing that story. I also did the math on 15 kids and 4 adults at Dollyworld for the day. They’ll be spending over $1000, easy. 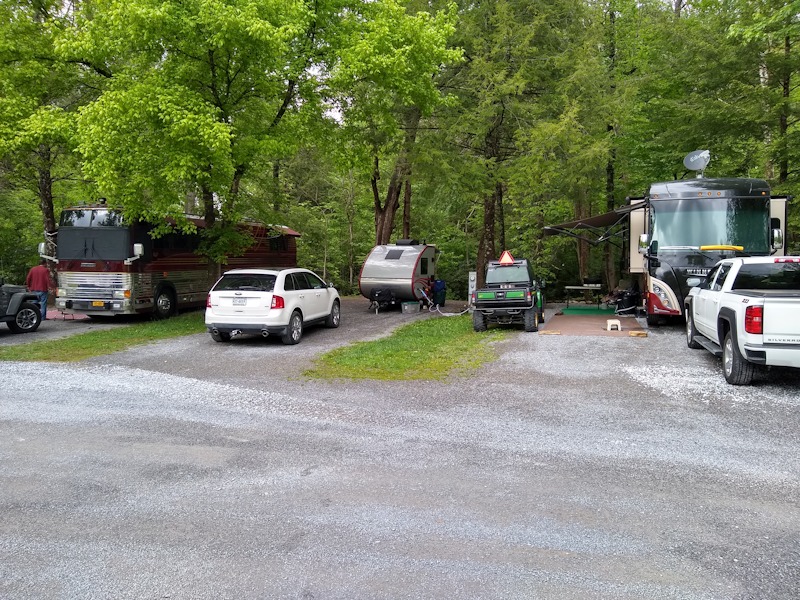 Wednesday was kind of cool and rainy, so we didn’t do a lot. We wandered the streets of Gatlinburg, and about all I can say about Gatlinburg is that if I had to pick between Gatlinburg and Pigeon Forge I’d pick Gatlinburg. Gatlinburg is at least walkable, although you are walking from a tacky t-shirt shop to a taffy shop to an “old tyme” photo shop to a candy shop to a restaurant, then back to another t-shirt shop to repeat the cycle, for about 10 blocks on both sides of the road. It kind of reminded me of Panama City Beach circa 1979. Most of the hotels are locally owned non chain places, which is cool. 1979 me would love 2021 Gatlinburg. 2021 me is over it. We planned to go to the Salt and Pepper Museum (over 20,000 salt and pepper shakers!), because why the hell would you not go there? Alas, it is only open 10-2 during the week, and we stopped by at 3 PM.

Earlier in week while watching some bad movie we downloaded from Netflix at night in the camper there was a photo booth scene and I mentioned that I had never actually done a photo booth photo. So when we walked by a photo booth in Gatlinburg we knew what we had to do. 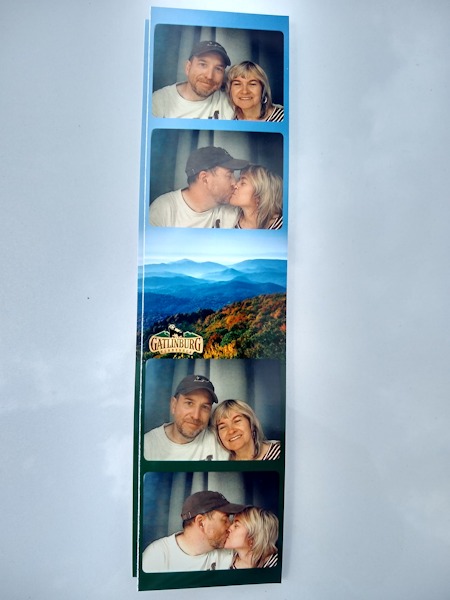 On Thursday we headed back into the park and made our way to Clingmans Dome and then all the way to Cherokee, NC, where we visited the Museum of the Cherokee Indian. Along the way we stopped at various scenic overlooks and did a couple of short hikes. It was low 60s and comfy when we left the campground and about 41 and windy at Clingmans Dome. The ½ mile paved walk to the observation tower at the peak is a real leg burner, as the pitch is pretty steep. Michelle has been nursing a sore hip, so she hung out at the car and chilled while I made a workout of the trip up by attempting to walk it at a normal walking pace with no breaks. I needed one break, and my legs were feeling it when I made it to the top. The view was worth the effort. 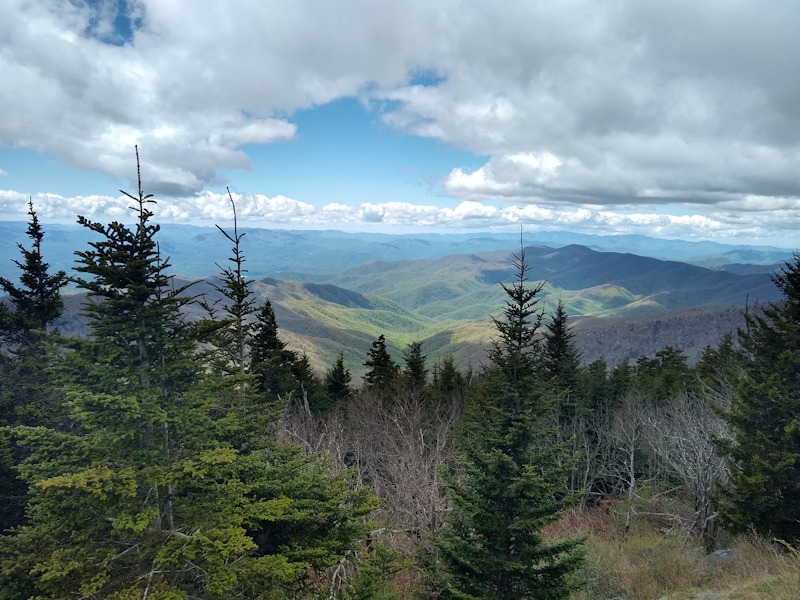 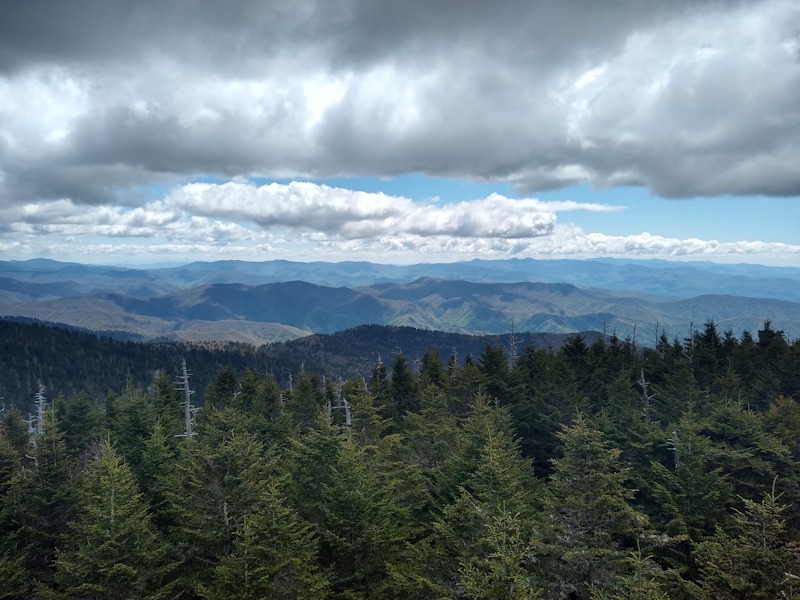 The museum in Cherokee was interesting, but it’s an old school museum with no interactive elements, just a bunch of static displays and a lot of reading to learn the history of the Cherokee people. I was there to learn, so I was fine, but I could see kids being bored sick there. In fact, we did see kids, causing trouble because they were bored, and their parents weren’t paying attention. It’s interesting to see businesses using wigwam in their name or totem poles in their imagery in Cherokee, as none of that has anything to do with the Cherokee people. They didn’t wear big feathered headdresses either.

Friday we hit the Roaring Fork Motor Trail, which is similar to Cades Cove. It’s a six mile one lane one way road weaving through the mountains exploring the history of the area, with a few scenic overviews. We didn’t see any bears, or really any wildlife. Then we met local friends for lunch at a BBQ joint in Gatlinburg, where we ended up lingering for 3 hours. Late afternoon I hit a trailhead about 15 minutes from a campground for a nice 4-mile hike to a waterfall that I couldn’t really see because the foliage was so thick. Oh well, it was a nice hike and I got to cross this sketchy bridge about 20-30 feet above the rocky river. Falling would have probably been certain death. (Hyperbole. Maybe) 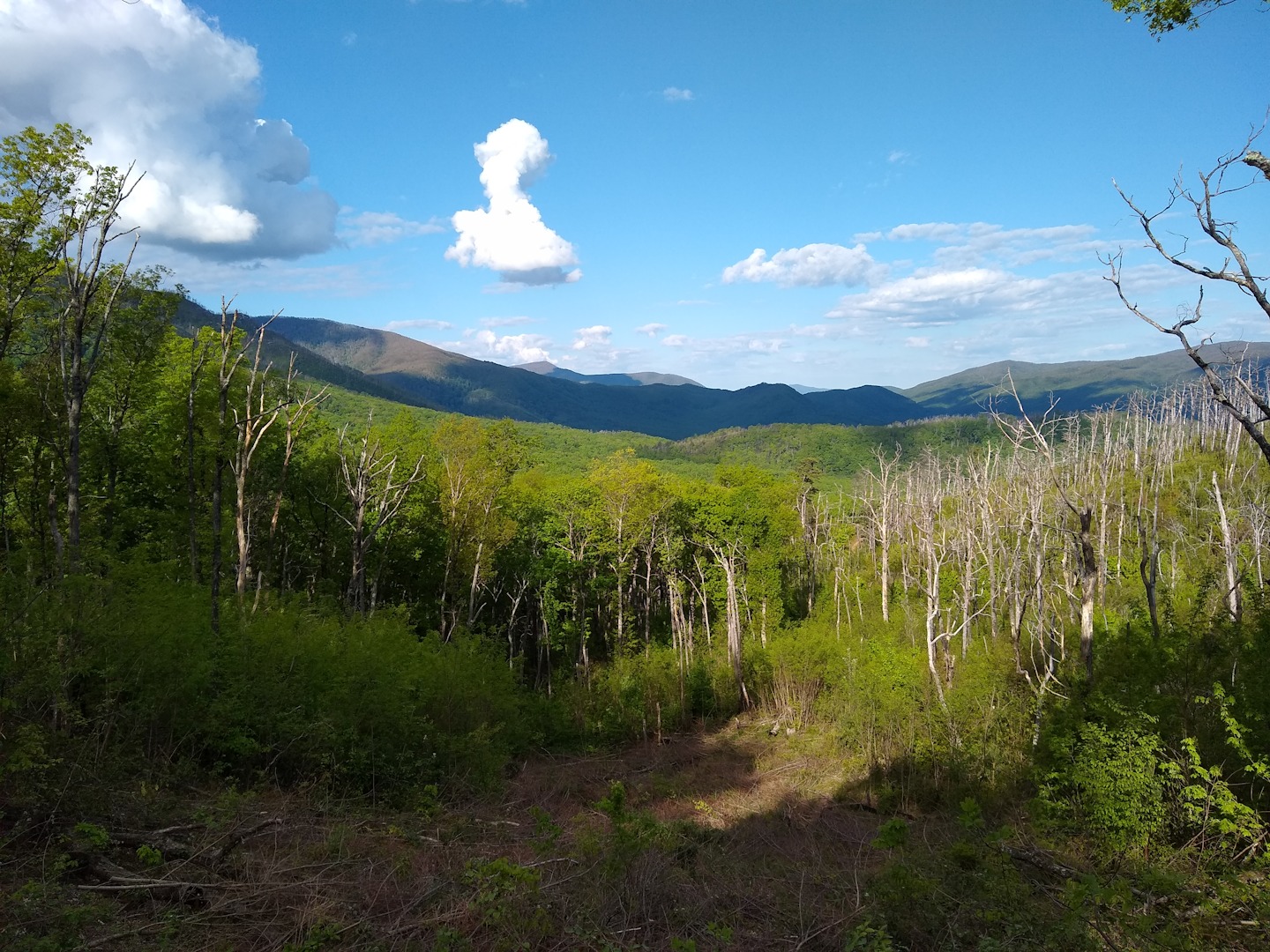 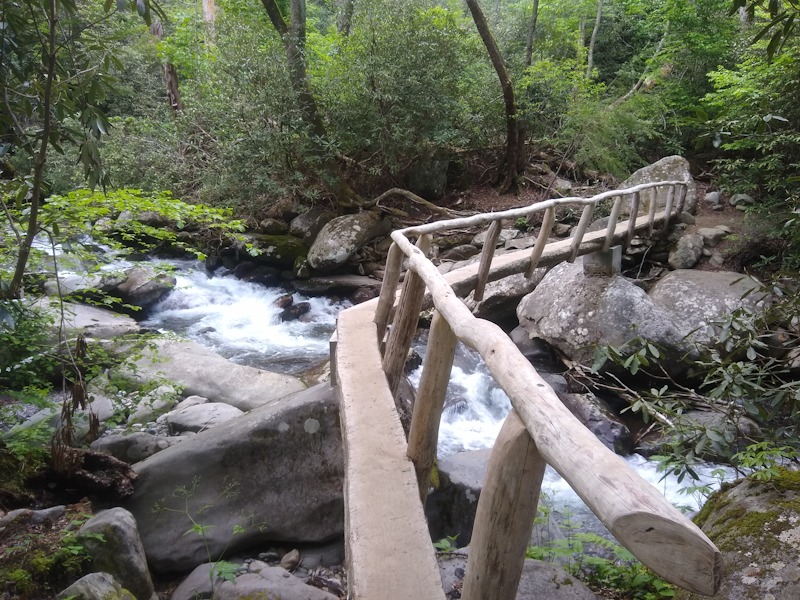 We spent our last evening of vacation chilling at the campground. Saturday AM we headed home. The lunch / gas stop in Bristol TN was a little sketchy as two of the three gas stations at the exit were dry, and the third only had 87 octane, which was what I needed, so it was fine. That made me a little nervous based on the news about gas shortages in VA but the gas stations along I-81 in VA were fine.

So, the Smokey Mountains vacation is in the books. I love the Smokies, and I could spend weeks there hiking. Gatlinburg and Pigeon Forge I’ll be fine with if I never visit again. 2021 camping season is off to a good start. Next up, Breaks Interstate park on the VA - KY border in early June, for a weekend of hiking.