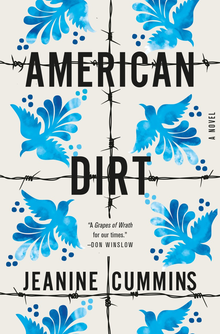 It’s May Day, but probably not a happy one as Republican Governors across the county tell workers to go back to work and risk death, or stay home and starve when they are cut off from unemployment. Sometimes, maybe most of the time these days, it’s downright embarrassing to be a citizen of the United States.

Furthering this malaise is the fact that I just finished the audiobook for American Dirt by Jeanine Cummins. It was Oprah’s book club pick for January, and the controversy from that initially caught my attention. Some people have a problem with a white women writing a book about the migrant experience. In the author’s note she says during her early research she wondered if this story wouldn’t be better told by somebody with browner skin. Obviously she wrote the book, taking four years with all her research, and I think the world is better for it. One of the blurbs on the cover calls it a modern Grapes of Wrath. I wouldn’t go that far, and that’s a good thing as I have never liked that book. The reviews are all over the place, with some people hailing it as an important book of the decade or even century, and others hating it. Generally speaking anytime art evokes deep and divisive emotions it's probably doing something right.

The book opens with a drug cartel in Acapulco murdering 14 people at a Quinceañera party in suburban Acapulco. Lydia and her 8-year-old son Luka survive the assault, but they know the cartel had vowed to kill the entire family, so they are in mortal danger. In an instant, Lydia goes from a middle class life with her reporter husband and the bookshop she owns to life as a migrant refugee, trying to get North to the US and away from the cartel still looking to finish the job by murdering her and Luka. The story follows then as they make their way north to a border town where they hire a Coyote to get them across the border and into Tuscon. The trip is incredibly dangerous, with robbery and rape a constant danger. It’s a danger Lydia and Luka can’t avoid. It’s a very tense story, with Lydia and Luka, plus some other migrants we meet, always on the edge of freedom or getting caught, of continuing north of getting sent back south, of living or dying.

The author spent 4 years researching and writing, and although I’m sure she got some details wrong and I think she gets the constant level of danger and dread endured by migrants right. Another criticism of the book is that Lydia is middle class, and not destitute and poor like most migrants. Most of the migrant character in the book are destitute. The only exceptions are the ones that got deported from the US and are trying to get back. I think she made Lydia middle-class to make is easier for US readers to feel sympathy. Destitute with no prospects and maybe fearing for your life is not something many people buying a $26 hardcover book can identify with. A middle class woman risking everything to protect her son is something just about all of us can identify with. I don’t see anything wrong with her choice.

Yet another criticism leveled at the book is that she made Mexico sound like a drug infested hellhole. I didn’t get that at all. She states in the author’s note that all the statistics regarding murders, etc. are the real numbers. The “feel” I got from the book is that just about everybody in Mexico was at worst indifferent to migrants, which quite frankly puts them well above how the US treats migrants, where about 40% of us are outright hostile towards them. Drug cartels are a fact in Mexico, and they kill a lot of people. Mexico is the most dangerous country in the world to be a journalist. Lydia’s husband who is murdered at the party in the opening pages of the book is a journalist. Yet, throughout the book many people in Mexico lend a helping hand to Lydia and Luka. In fact, they don’t make it to the US without all that unexpected help.

The author states she wrote the book specifically to give a voice to migrants, who are often seen as a faceless brown mass by us here in the US. She succeeded, at least with me. I’ve been thinking about the book non-stop since I started it, and I think I’ll be thinking about it for quite a while now that I’m done. Really great books change you. I think this book changed me.

In other news, we had takeout Mexican food for dinner (Michelle's idea - not related to the book) and played games tonight, with me winning Sagrada and 2 of 3 in Yahtzee. So it was a good night, or as good as it's going to get in a pandemic.