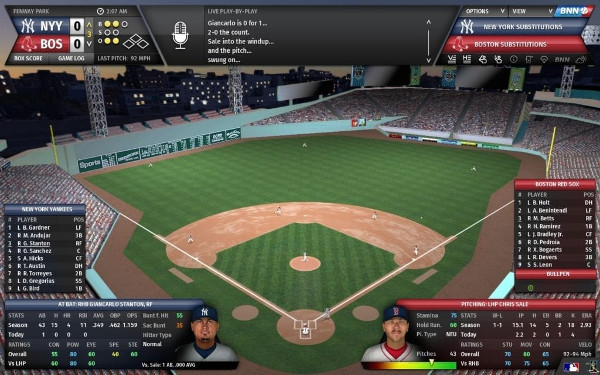 I downloaded Out Of The Park Baseball 2020 last night. I first downloaded the game back around 2000 or 2001 and I’ve played it every year since. I immediately signed on as the Manager and GM of the Red Sox and set about making some sense of their nightmare of a roster. I played through to about the middle of July last night, and we are sitting in third in the AL East, no threat to win the pennant but just in the wildcard race enough to make me think I can get the team into the playoffs. So what I need to decide before I play again this weekend is, do I go for the wildcard or do I take advantage of the trading deadline to rebuild for next year? John Henry’s goals at the start of the season were:

If you are wondering how I win it all and rebuild the farm system in the same year welcome to the club. I did sign JBJ to a 5 year, $85 million contract, which seems to be a team-friendly deal. His offense is much improved this season in my OOTP universe. The really great thing about OOTP is that there so much data to work with that it is a completely immersive experience. I can start playing at 7 PM and the next thing I know Michelle is telling me she is headed upstairs to bed at 10 PM. Under normal circumstances that can be a problem, but now that seems like the greatest thing ever.

In other news trending towards the happy side of life, a couple of my favorite artists released new music today. Butch Walker released a new song last night and announced his new album will be out in early May. And Colin Gawel put a new song on Soundcloud.

I also met up online with a couple of friends for a virtual happy hour, and I’ve got one scheduled for tomorrow night too. Michelle and I wasted away the evening binging Veronica Mars on Hulu. I think that show was on for a while so getting through the shows should eat up a lot of time.

And with that, I will end today’s update before I venture off into anything negative. The Red Sox roster is enough negativity for one day.