We got up early on day 3 and packed up to move on down the road, but not without some excitement. We had a sewage hookup at the site but for reasons unknown my gray water tank would not drain out the hose. It would drain normally without the hose, but for some reason connecting 6 foot of hose that was absolutely 100% free of any block would cause the water to not drain. It was absolutely defying all logic. I finally decided I had a weird air pressure thing going on or something and that it would drain normally at the next campsite.

I was correct about that assumption, although why it happened is still bothering me.

Anyway, we had already covered all the way to milepost 112 at the detour, so we hopped on I-81 and jumped down to the end of the detour - somewhere around milepost 134, and got back on the BRP. It was raining and foggy too, so not a great start to the day. We saw dozens of deer on the sides of the BRP, including one that was white with black spots, almost like a dalmatian. Luckily they stayed out of the road, and we didn’t even have a close call.

We planned to hike to the summit of Rocky Knob at milepost 168, but when we got there visibility was about 20 feet so the 360 degree view wasn’t going to be very interesting. So we skipped it. I pulled off the BRP at Boone NC for lunch and gas. I thought Boone would be a quaint little mountain town. I wasn’t prepared for the hell world of traffic and crowded fast food joints that I found. It was a random Wednesday in September, and the kids that should be at Appalachian State are all at home doing distance learning. What the hell was going on in that town? Every fast food joint had 20+ cars in the drive through lines. I finally parked near a Wendy’s and Bojangles and walked into the Wendy’s because had I chosen Bojangles I might still be in line. When I came out with our lunch I found some dude at the vehicle, asking Michelle about the camper. He wasn’t the first, or last person that day that would come strike up a conversation about our camper. So hopping off the BRP for a fast food lunch and gas station visit took 90 minutes. Maybe all those people in Boone are like me, stopped in for lunch, and now they can’t leave.

Our next stop on the Parkway was Mabry Mill, which is named for the Mabry family that actually ran the mill there at one time. It is the most photographed thing on the BRP. It was also the busiest stop we saw all week on the BRP. 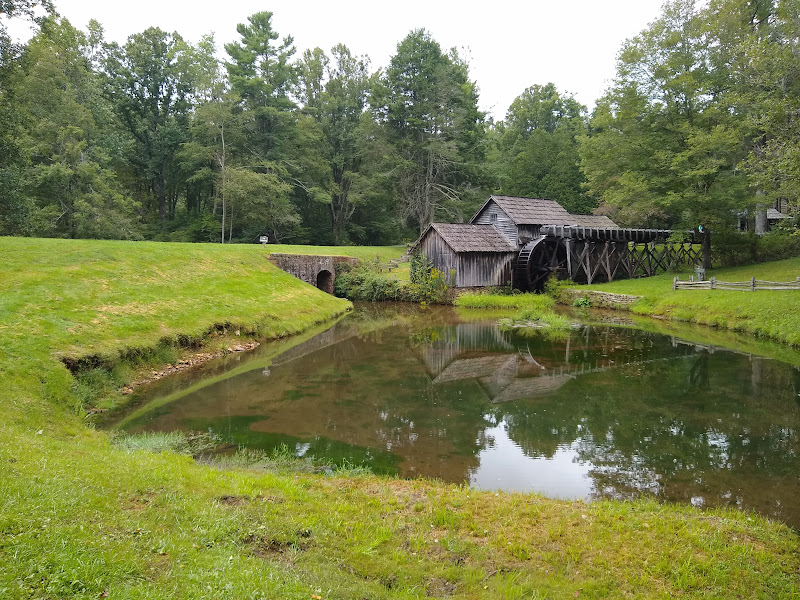 We stopped at a bunch of overlooks but as you can tell it wasn’t optimal photographing conditions. We did a couple of more short hikes and rolled into our next stop at Stone Mountain State Park around 4 PM. 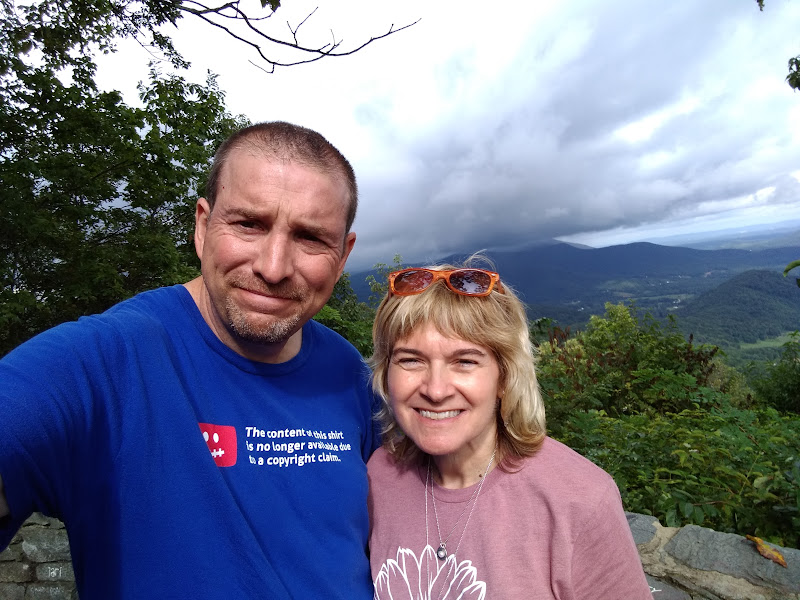 Stone Mountain State Park is really nice, the sites are large and shady, spaced out nicely, and the scenery is gorgeous. The bath houses are the weak spot. They are clean, but the showers are Navy showers - push the button, get 30 seconds of pre-mixed warm water, repeat until done. It’s also kind of remote - 20 minutes from the nearest gas station. We got to know our camping neighbors on both sides as they came over to take a closer look at our camper. I had no idea when I bought an Aliner Ascape that it was going to be such a conversation starter. On Thursday we called an audible and stayed put at the campground. There was really great hiking available right there, and after 3 straight days of driving, even at 35 mph on the BRP, I was ready for a break. So we did a 2.5 mile RT hike to see Stone Mountain Falls and get a good view of Stone Mountain. The hike involved navigating a 20-story stairway built in the woods to help people safety visit the falls. After the hike and lunch at a local county store, we decided to head into town to gas up the truck, so I wouldn’t have to deal with it immediately the next day while towing. Both nights at Stone Mountain were spent relaxing by the campfire, then retiring to the trailer where I destroyed Michelle in Scrabble. *

Nothing says fun like the imminent threat of death 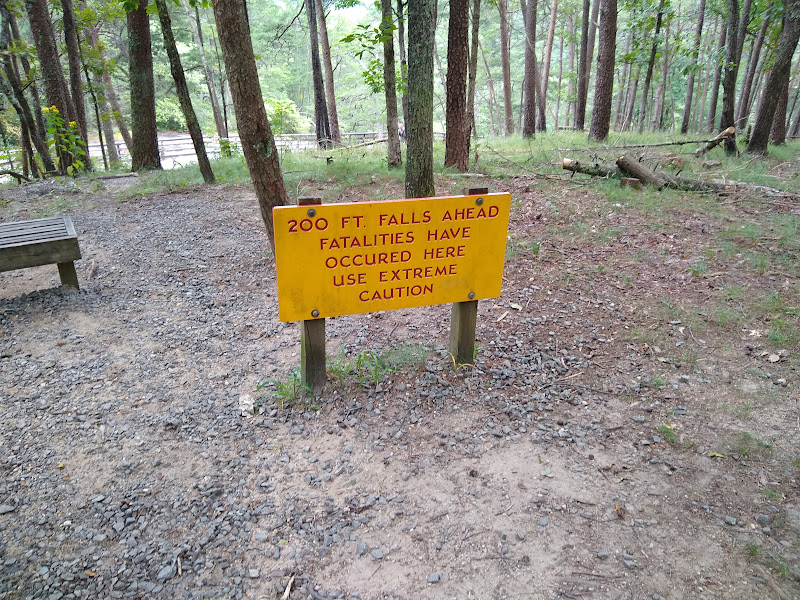 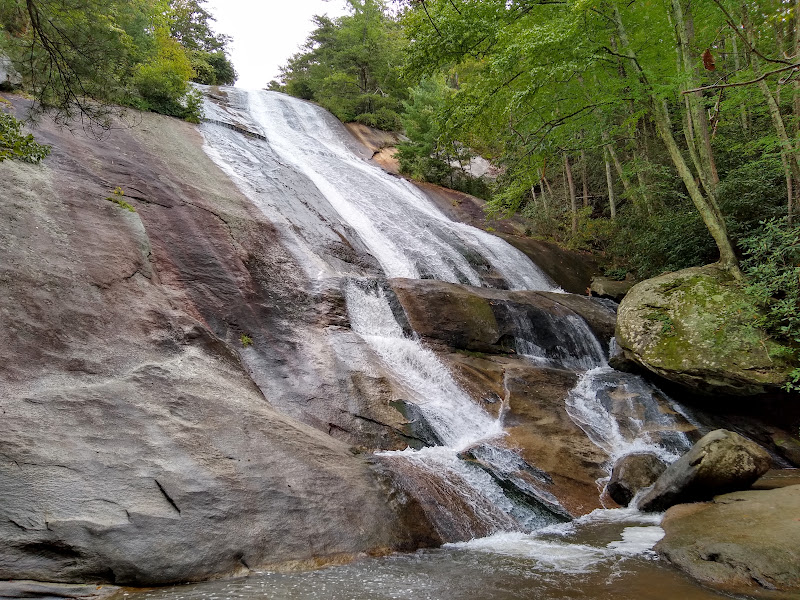 I’d like to thank the people of NC for not defacing their Stone Mountain with Confederate graffiti. 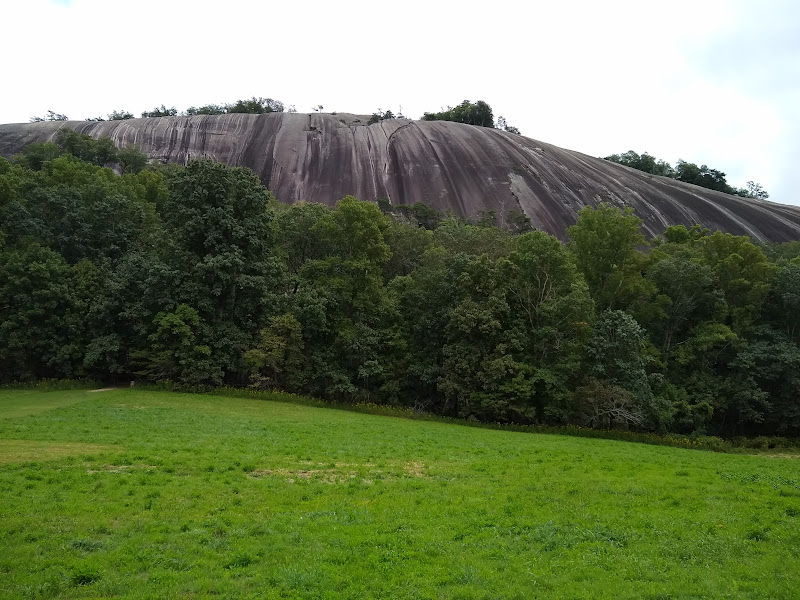 A couple of lessons learned are that 3 days of driving all day are my limit, and that we need to plan more variety for breakfast and lunch on longer camping tips.

*Partially true - she won Wed night but I did crush her on Thursday night, managing to play “covid” for big points, which isn't even a legit Scrabble word, but she didn’t challenge it. I also played poop on a triple word score spot, which isn’t a great play for points, but anytime you can play poop in Scrabble you have to do it.