I took a couple of days off last week to make a 4-day weekend out of a trip to Breaks Interstate Park. I needed 4 days because it’s a 7-hour drive from Richmond. Which means it would be 9 hours from VA Beach. You never think of VA being that large, but the state extends way west. The park is basically due north of Knoxville, TN. The drive there takes you through the heart of Virginia coal country, which was not a part of the state I had visited in my 20+ years there. We did see this on the drive though. 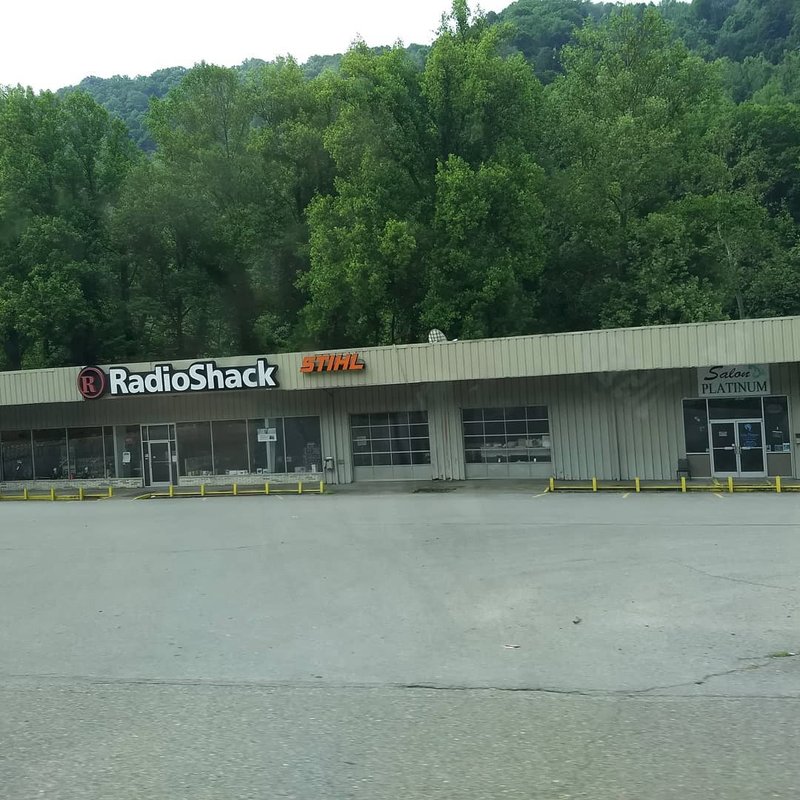 I did not know there was an open Radio Shack left. In truth, I suspect it’s not actually selling Radio Shack type stuff, but they just left the sign. But I’m going to maintain the fantasy by assuming that had I really needed a 500 ohm resister, they would have had it for me.

The park is really remote - it’s a good 15-minute drive to the nearest gas station and two hours from an interstate highway, coming from the east. In fact, I think this is the first time I’ve ever spent a weekend camping without leaving the park. Yet I still had a T-Mobile signal. I did not expect that. 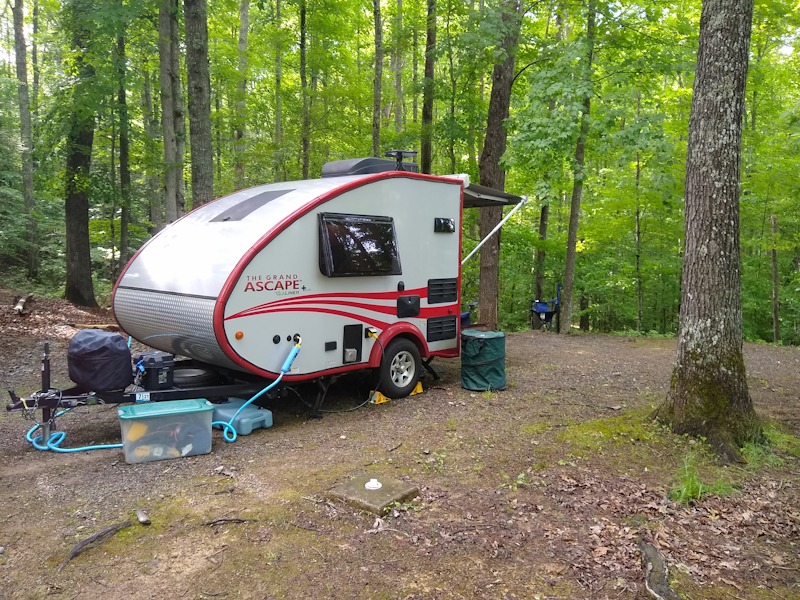 The park is right on the VA-KY border, with a 1700-foot deep canyon with a river at the button as the primary feature. It’s billed as the Grand Canyon of the South. 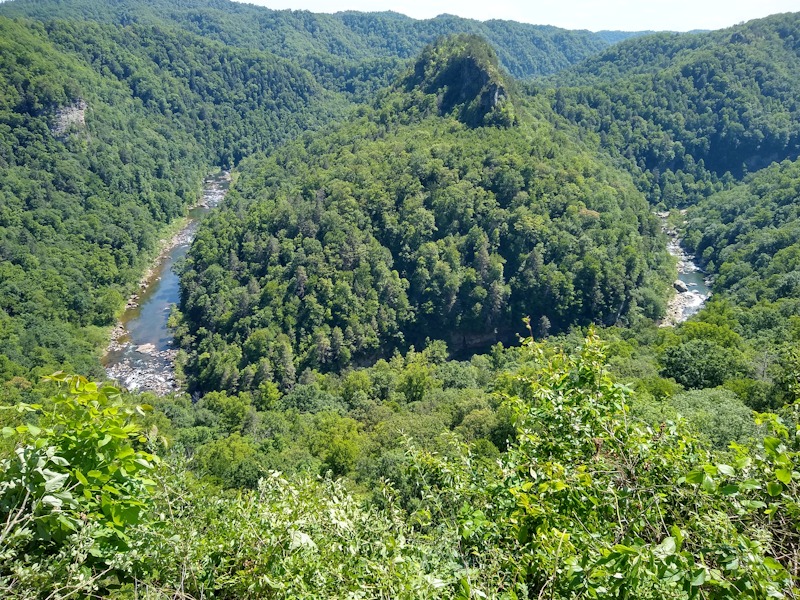 On Friday we hiked, We did about 7.2 miles down the river and back in a lollipop. Don’t do that. The hike down to the river isn’t worth it as you only are on the river for about 50-100 yards, then it starts climbing again. And the trails are not well groomed. We took Laurel Branch down, and it’s basically a straight shot ¾ miles down the side of a cliff. There are a few switchbacks, but not enough. It had rained the previous day and the steepness and wetness made it treacherous. In many places it’s so narrow you are walking one foot in front of the other, and for large stretches you are right on a ledge with a multi-hundred foot fall one stumble away. It was a lot of fun in that “what the hell are we doing” way. Then at the bottom you get about 1 minute on the water and then the river trail starts a 1700-foot climb back up in one mile. That’s a 32% grade friends. The river trail at least is a series of short switchbacks.

Nice view for lunch but I'm not sure it was really worth the effort. 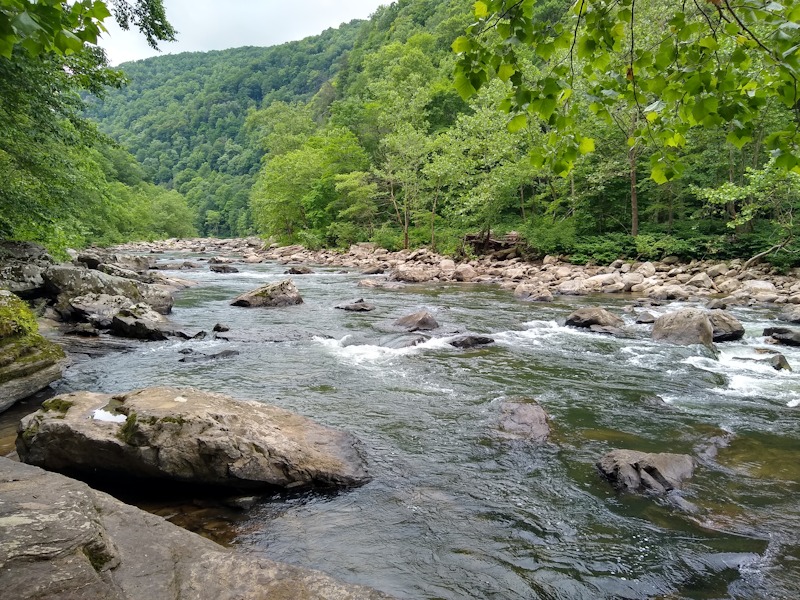 The Prospector Trail that run between the two trails is fabulous though. It runs at the base of some huge and amazing rock formations. It’s steep in places but not consistently, and rocky as all hell, but loads of fun.

They really don't want to rescue clueless tourists from the trail 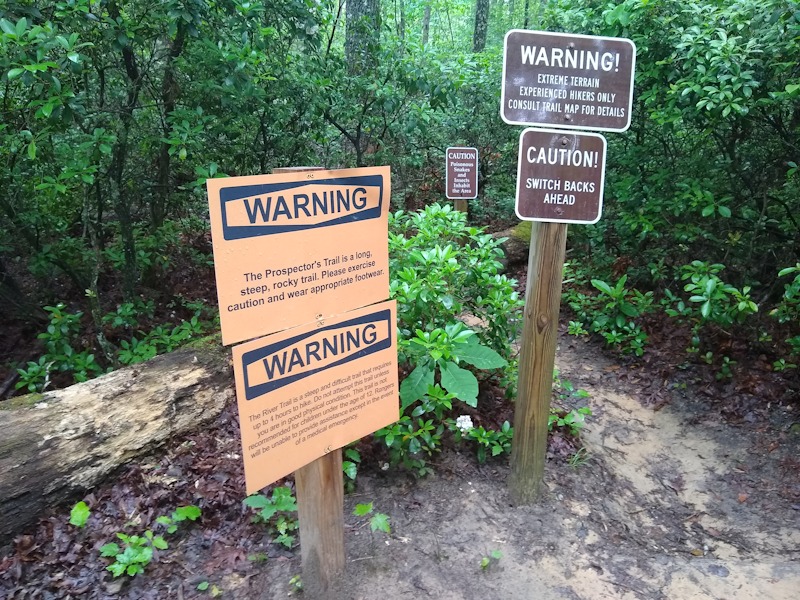 I'm not kidding about the rocks 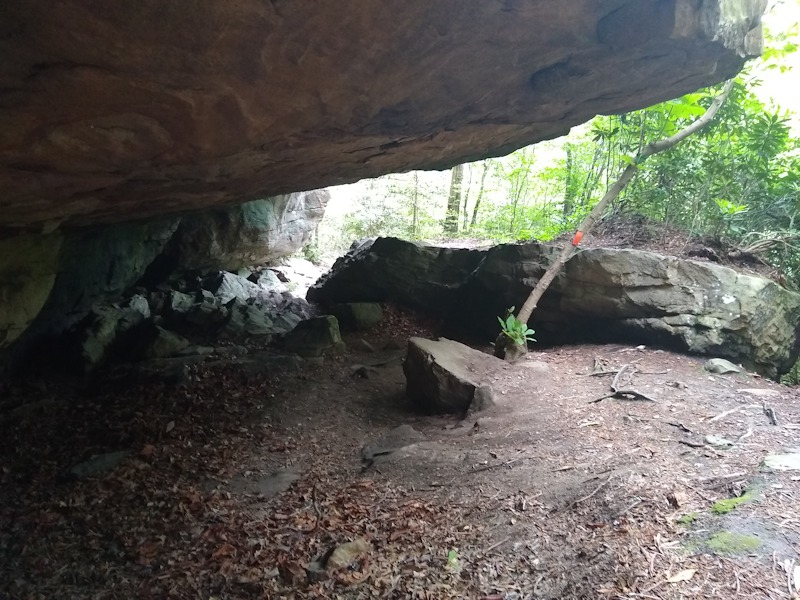 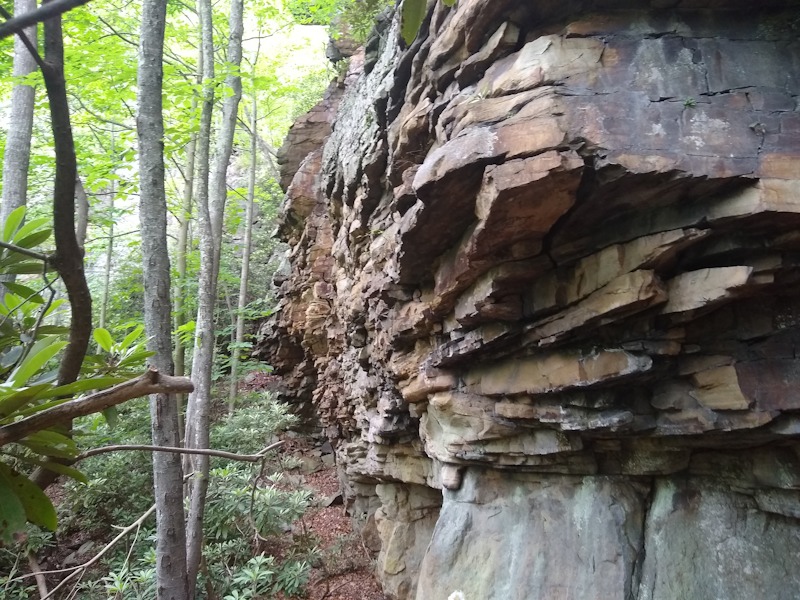 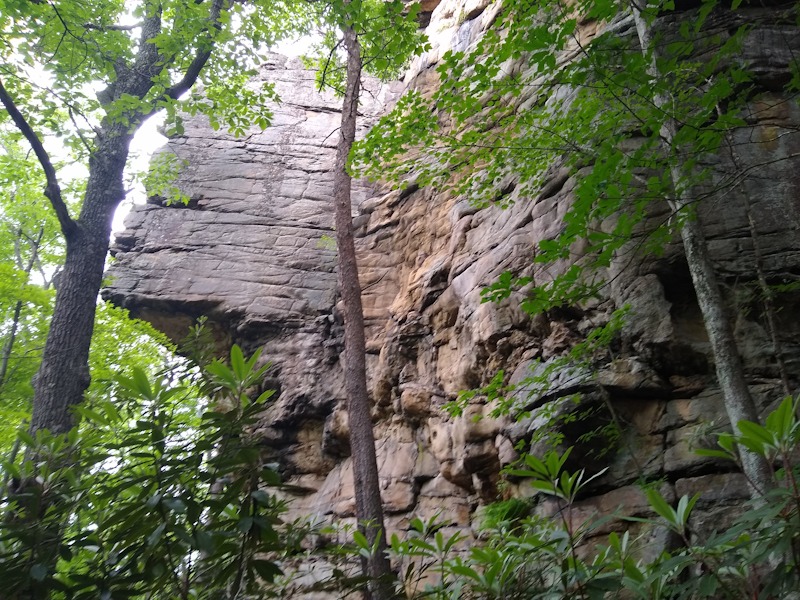 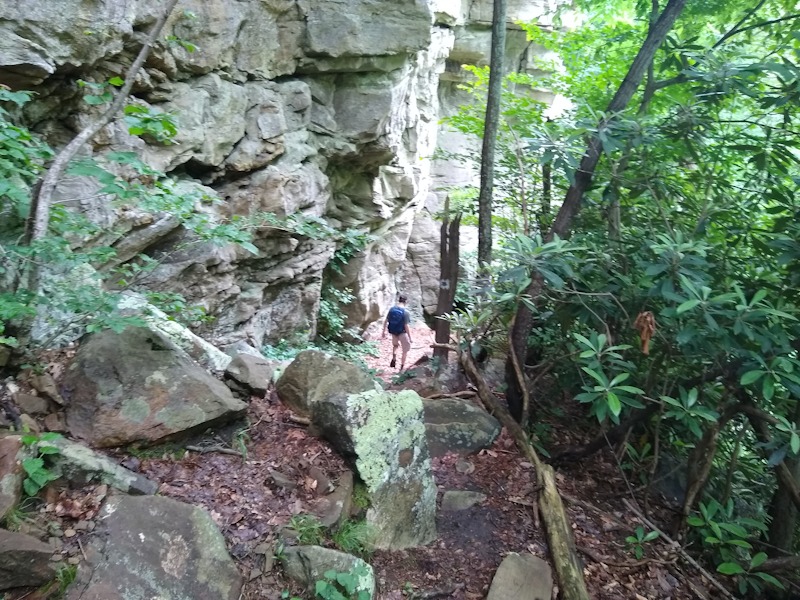 After the hike, we drove around the park and checked out the view from several overlooks that are the top of the rocks we were hiking along earlier in the day. 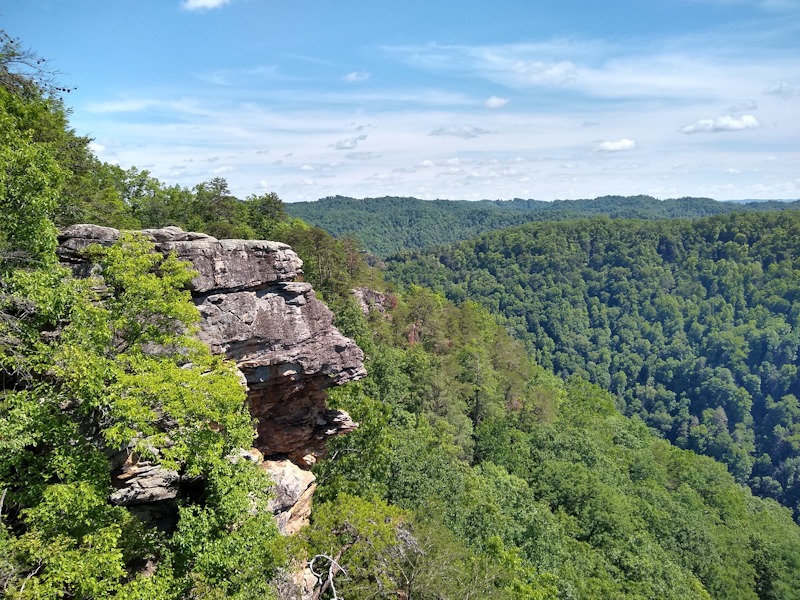 Sunday was kind of a repeat, except that after the Prospector trail we turned right instead of left on the Laurel Branch trail, staying above the river and among the rocks for about a 4-mile loop. There is a 2/3 mile out and back trail called the Geological Trail here that has a bunch of markers and a trail guide explaining the science behind all these huge rock formations. It was really interesting and I learned some stuff. 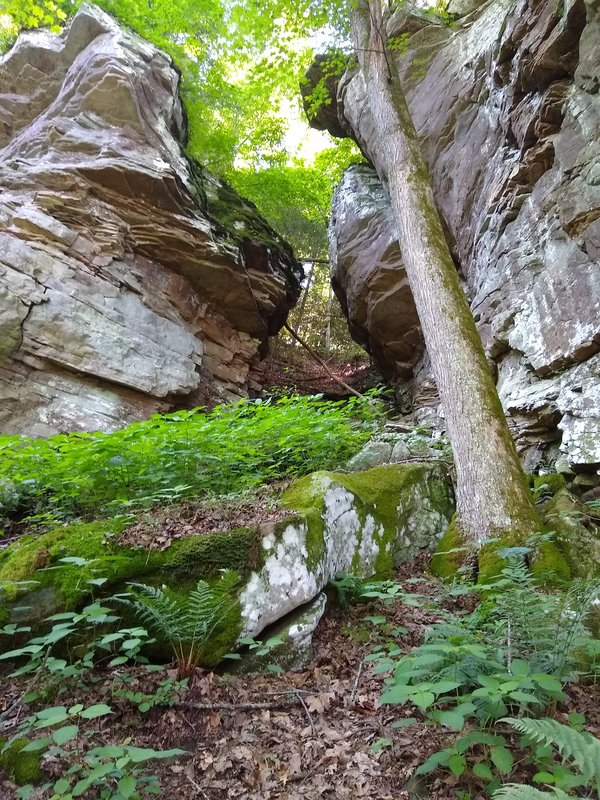 This was a natural arch many, many years ago. 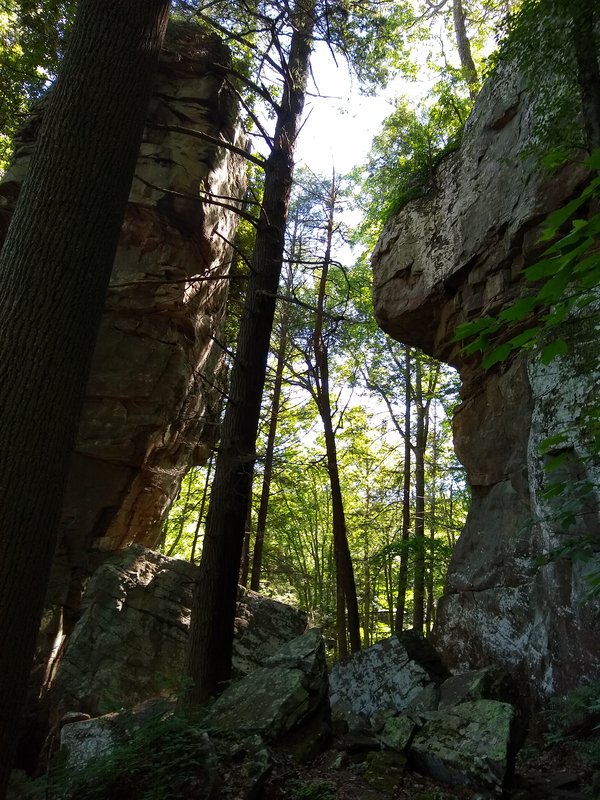 After lunch, we lazied away the day lounging at the campsite reading and relaxing under postcard perfect blue skies and 72F temperatures. After grilling steaks for dinner on Saturday night we met up with a few other small camper folks that were there for an impromptu campfire party. Sitting around a campfire drinking with newly met friends was something I took for granted when camping prior to last year. But after camping about 30 nights last year barely speaking to another person other than my wife, I won’t take it for granted anymore. It’s the best part of camping.

Breaks is a neat park. They’ve got lodges, a swimming pool and ziplines (both closed, presumably due to COVID or maybe staffing issues), cabins, and a decent bathhouse in Campground D at least. But as I said at the top, getting there is a hike from just about anywhere.