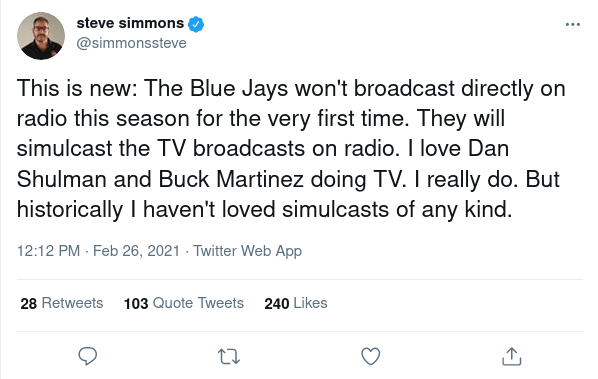 This is simply unacceptable. Baseball is the only thing broadcast radio is still good for.

My earliest memory of MLB is my parents letting me sleep in a sleeping bag on the floor of the living room where the stereo was, so I could go to sleep listening to the Red Sox on Armed Forces Radio. I was 6 or 7 at the time and we were in Spain, so 6 PM baseball games would start at midnight on the radio in Spain. 45 years later I still fall asleep to baseball radio broadcasts streaming online.

In the early days of online streaming, before video was even a thing, I built an FM transmitter so I could sit outside on the deck with a portable radio and listen to the Red Sox, just like my grandfather did on his porch. Yes, I could have hauled my laptop out there, but the ambiance just isn't the same. He lived in Boston and they had every Red Sox game on TV for free, but he preferred to sit on the porch in the dark with a portable radio and a whiskey. I can confirm that it is still a damn fine way to enjoy a ballgame.

Play by play on TV is kind of a mess. We can see what is happening, so the announcers mostly ramble about everything except the game, as the viewers don't really need them to explain what is happening in real time. Radio, of course, is different. We need the announcers to actually give us the play-by-play, it is the actual point of the whole exercise. Since they are busy telling us what is happening on the field, they don't have time to ramble. It's a win-win.

So what I'm saying here is the Blue Jays front office sucks.