On Wednesday we had a 4 AM wake-up call for our reservation to watch sunrise from the top of Cadillac Mountain. At certain times of the year, you see the sun first from Cadillac Mountain. This was not that time of the year, but you are still seeing it before anybody except a handful of other people that may be in the right spot in Maine.

Or, you don’t see the sunrise at all. 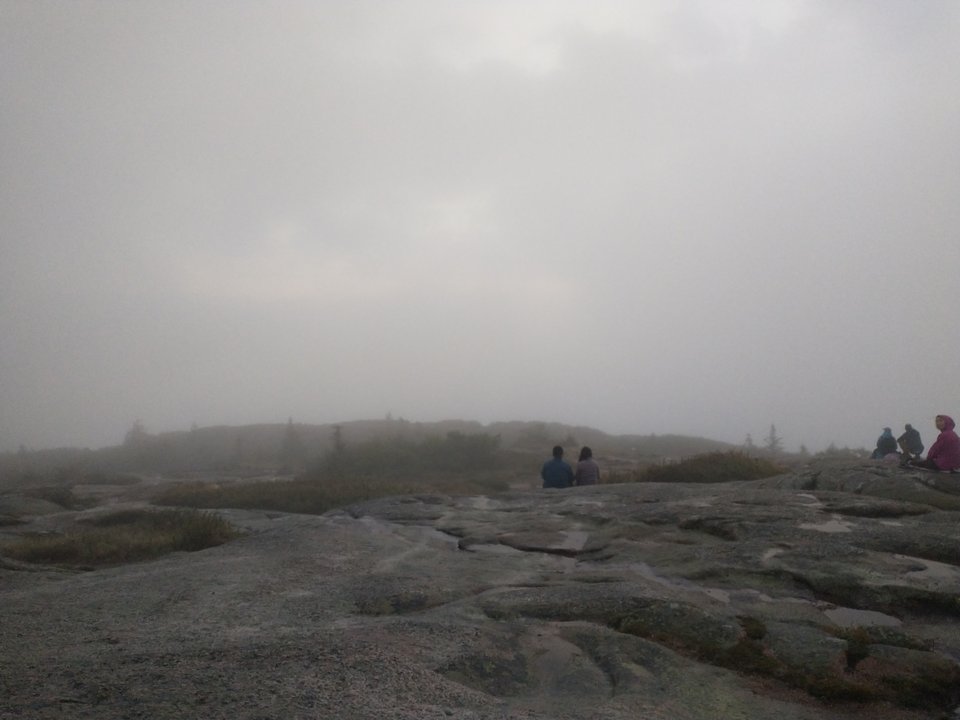 This is as good as it got 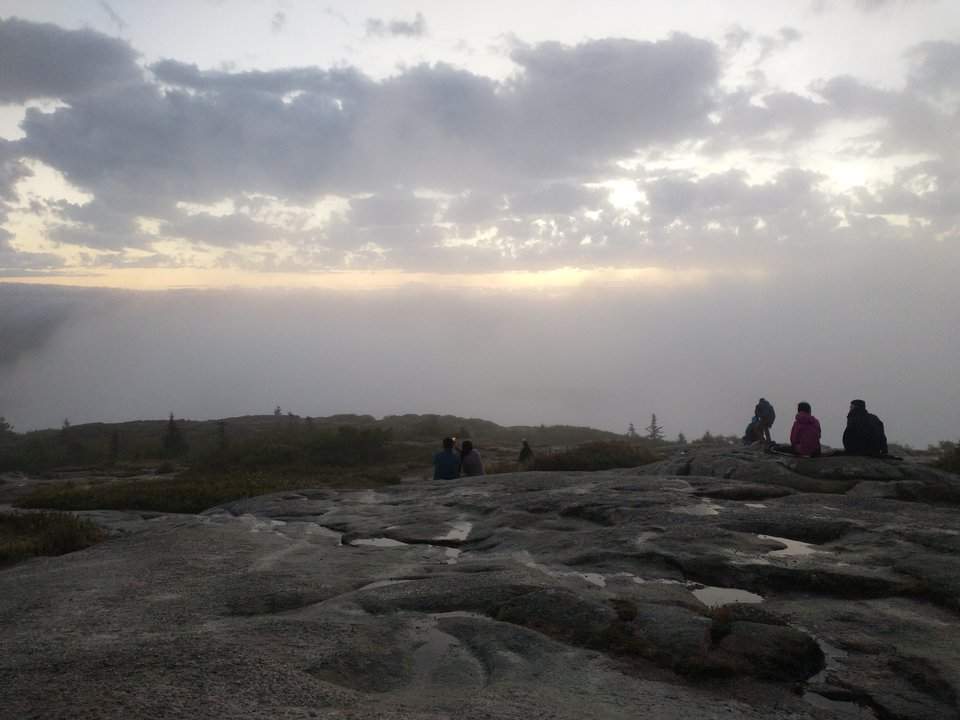 The drive up to the summit was on a windy, narrow road. I had about 5 feet visibility in front of the car, and no car in front of me to follow. It was a harrowing drive and even maybe more scary the next day when I could see what I had done in the fog. Anyway, as I said to Michelle, we really experienced sunrise on Cadillac Mountain. Because we sure as hell didn’t see it.

After sunrise, we went to a local cafe for breakfast. My tweet best describes the breakfast.

Then we went back to Acadia and drove the loop road, stopping at the overlooks and enjoying a crisp, cool, clear blue sky fall day in Maine. We made our way to Jordan Pond and did the 3 mile hike around the pond. 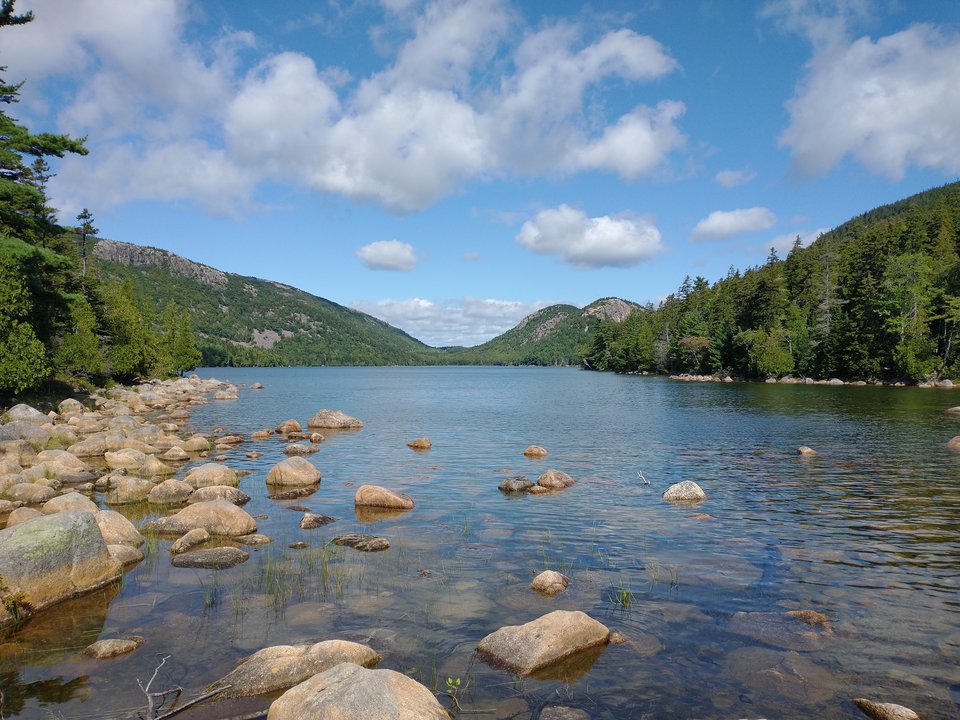 After that, we headed back to the campground. I chilled in the hammock for a bit before getting bored and deciding to go on another hike at Acadia Mountain Trail, or as I have renamed it, the hike of 10,000 granite steps. It was a bit of a slog at times, but the payoff view from the top was pretty damn spectacular. 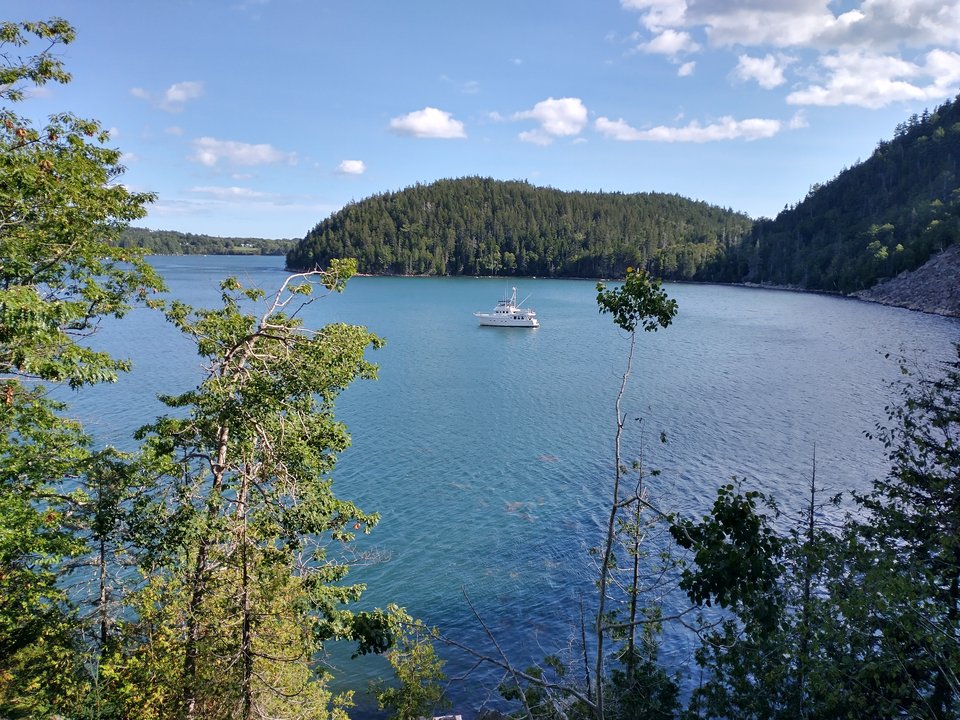 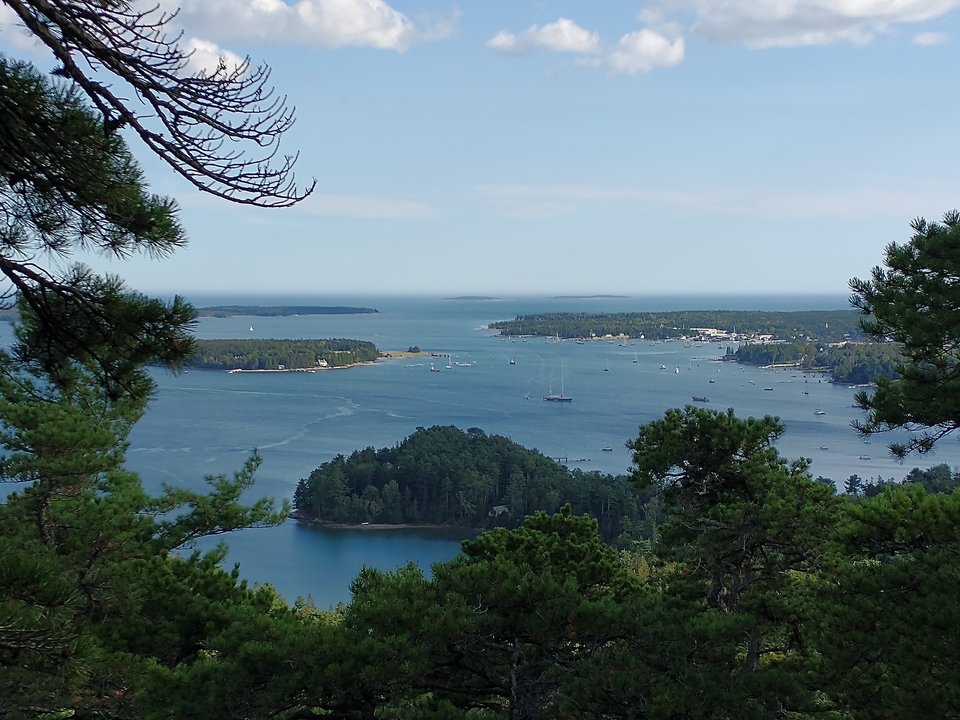 That evening, we cooked at the camper, and called it an early evening.

When our sunrise on Cadillac failed, I had gotten us a reservation for a normal visit to the top. So we had passes to head back to the summit between 9:30 AM and 10 AM. It was a spectacular day, albeit a bit windy and chilly at the summit. 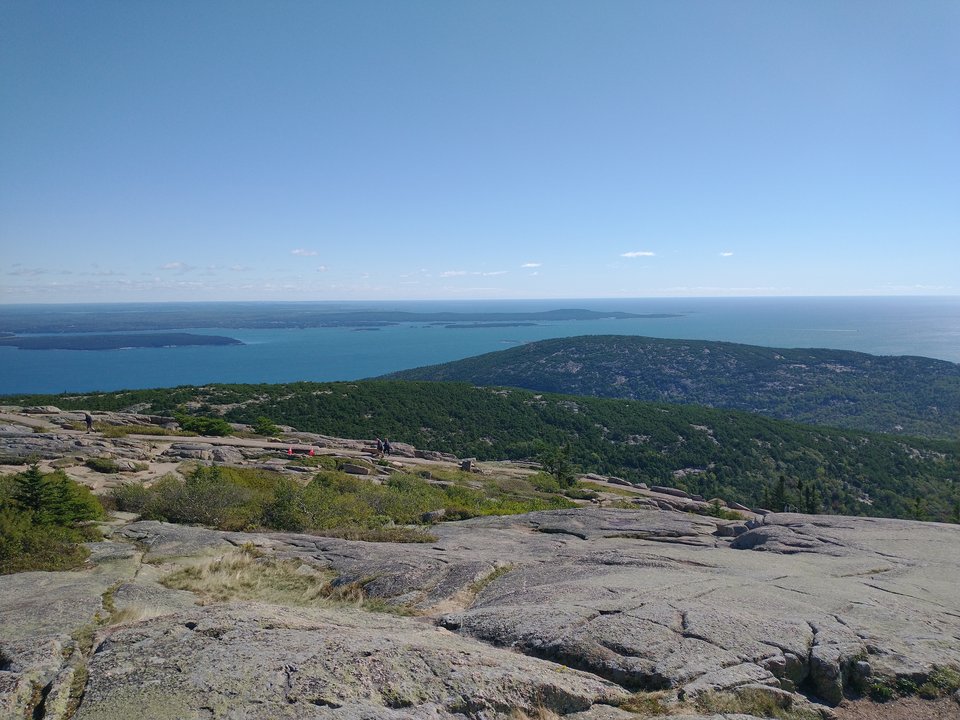 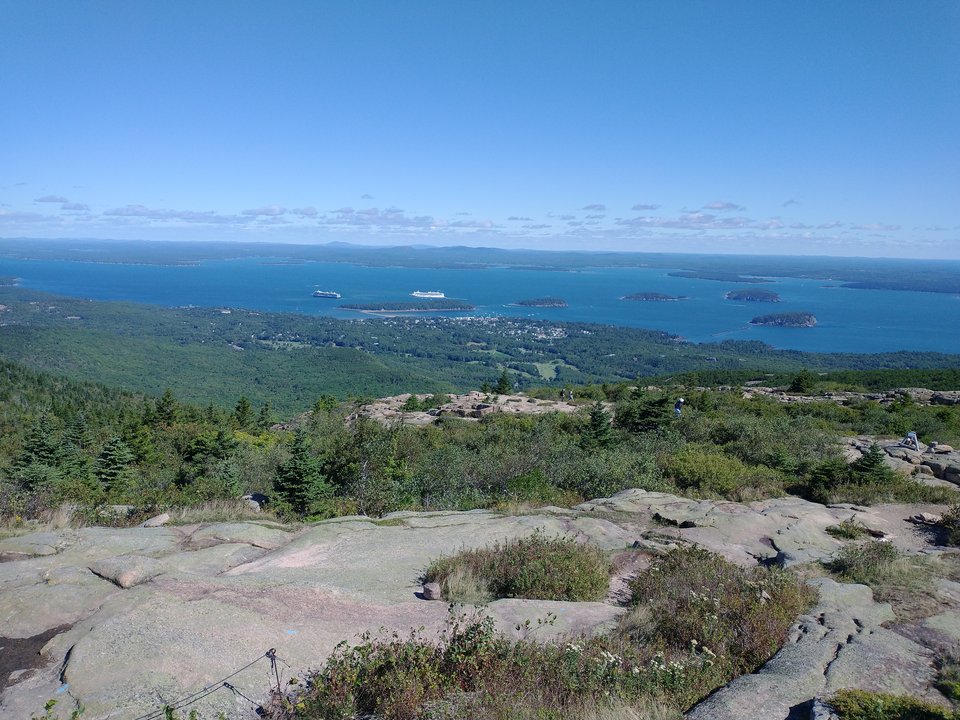 After that we continued around the park loop road again, eventually stopping at Western Point overlook, where we spread out a blanket, and kicked back on a bluff overlooking the ocean. We did some birding, and observed a playful seal in the ocean. Between birds, sea life, our Kindles, and maybe a little napping too, we spent several hours just chilling at the overlook. 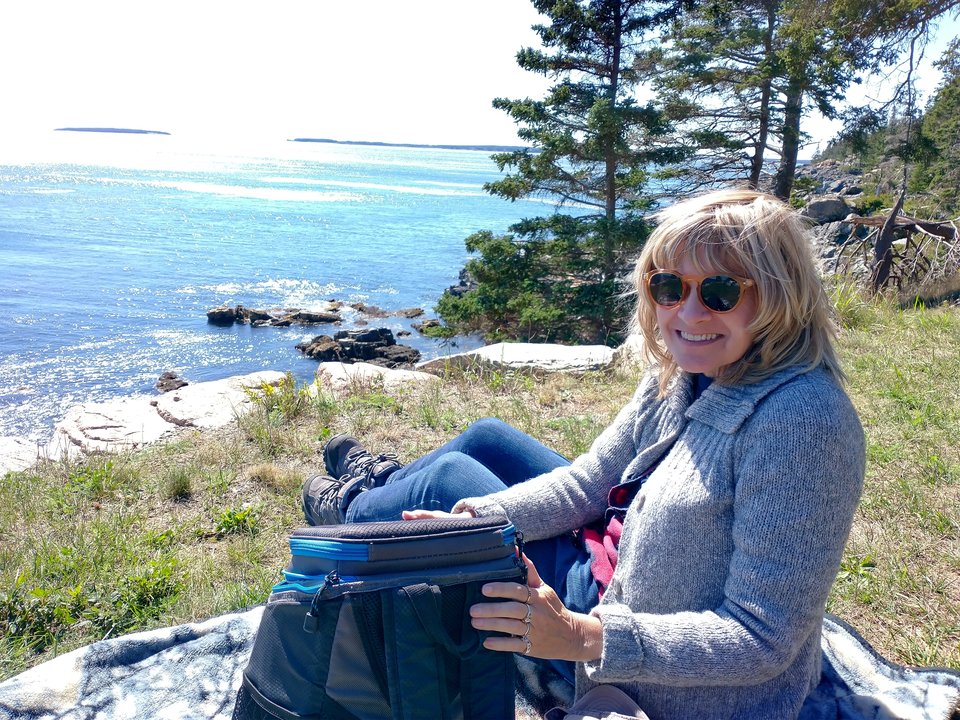 We stopped at Thunder Hole again. Thunder Hole is a cave that when the water hits it right causes the airholes in the cave to rapidly expel air, resulting in what can be best described as the sound of a very large toilet flushing. It typically is best around 90 minutes before high tide. The day before in the fog we were there at the right time along with hundreds of other people, but it was quiet. Today we were about an hour early, had the space to ourselves, and heard the noise twice. It was not the thundering boom it can be, but it was something.

We also visited the Abbe museum in downtown Bar Harbor, which is a museum dedicated to the indigenous peoples that were in Maine long before Europeans. It is a really well done museum and definitely worth a visit.

Eventually, we headed towards Southwest Harbor, where we planned to have dinner at Beale’s Lobster Pier. Along the way, we stopped for this photo. No, I can’t explain it. 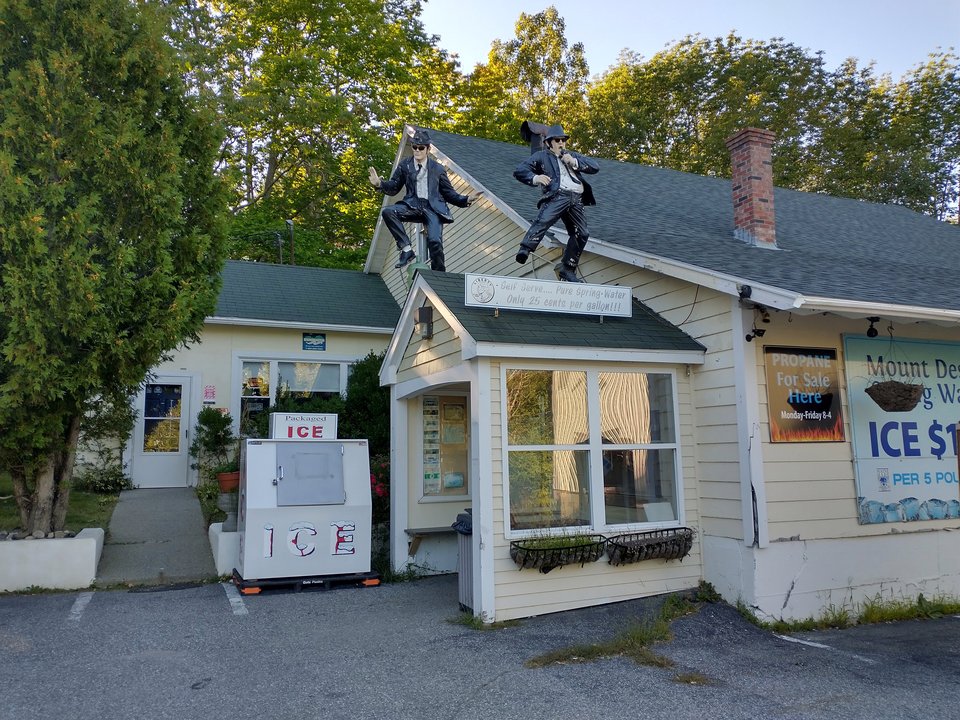 The lobster dinner right at the pier in Maine was just as tasty as you are thinking it was. That night we did the campfire and chill thing again, followed by our new evening obsession, gin rummy.

Friday was our last day. Bar Harbor is very touristy, and it only gets worse on the weekends. We decided to make a very scenic one hour drive to the Schoodic Peninsula, which is the part of Acadia National Park that juts off the mainland. That means 99% of visitors to Bar Harbor never go there. We saw more amazing Maine coastline, did another picnic with a view, and then found a deserted piece of beach to set up our chairs and just chill in the glorious cool temps, warm sun, and ocean breeze. 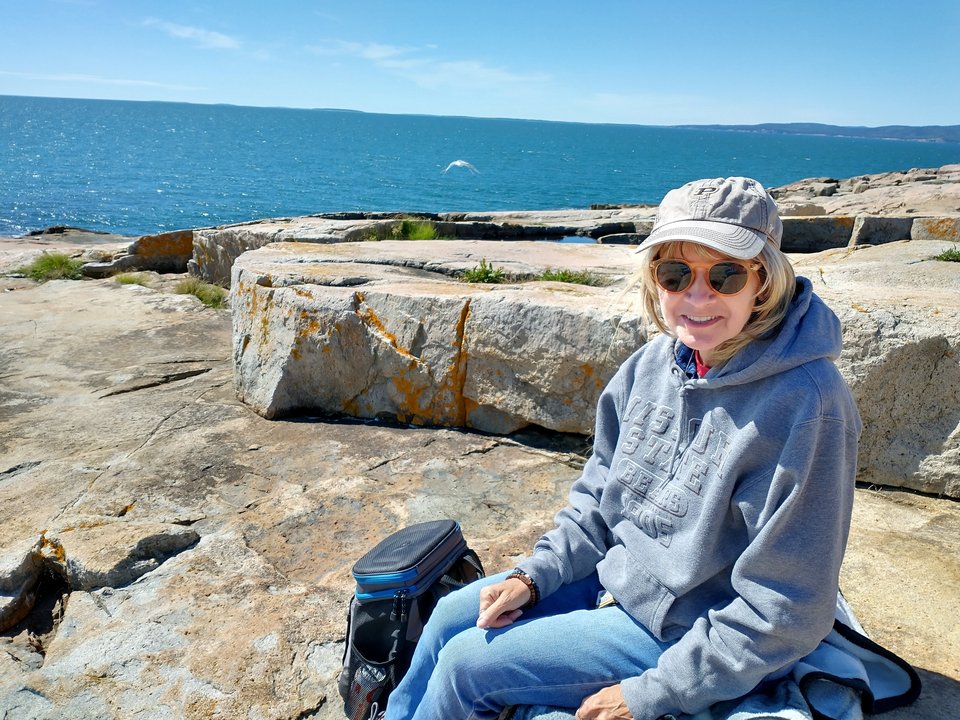 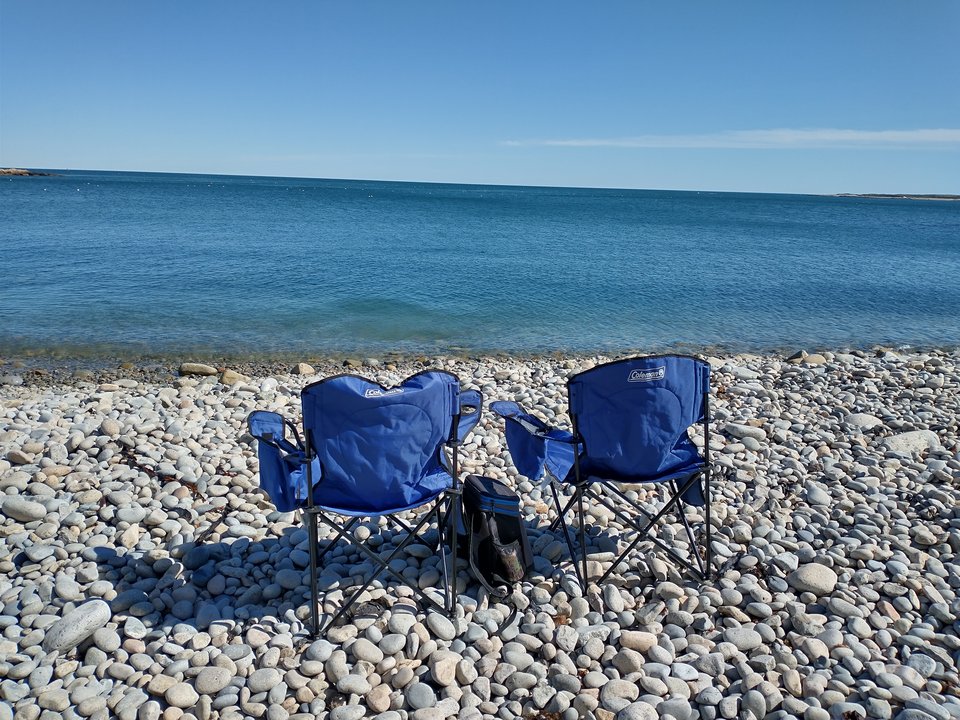 After dinner back at the camper I wanted to go get lobster ice cream, but the place is right in downtown Bar Harbor and given the traffic and lack of parking on weeknights I wanted no part of it on a weekend night. Also, I don't particularly like cold lobster. So we randomly picked an ice cream shop based on it not being in the village center, and we ended up with maybe the best ice cream we've ever had. Seriously, it’s better than Carl's in Fredericksburg, VA. If ever in Bar Harbor, don't miss out on Udder Heaven.

On Saturday we hit the road by about 8:30 AM, arriving at our overnight stop Orange County Hops just north of NYC around 6 PM. After enjoying a couple of tasty brews and really great conversation with the owner and a few regulars, we retired to the camper to spend the night in the brewery parking lot. We got up early the next day for a thankfully uneventful drive home.

The Maine coast is a magical place. The week in Maine exceeded expectations in every way. We will be back. For one thing, Michelle wants to see a Moose, so we’ll need to explore some other parts of the State for that. 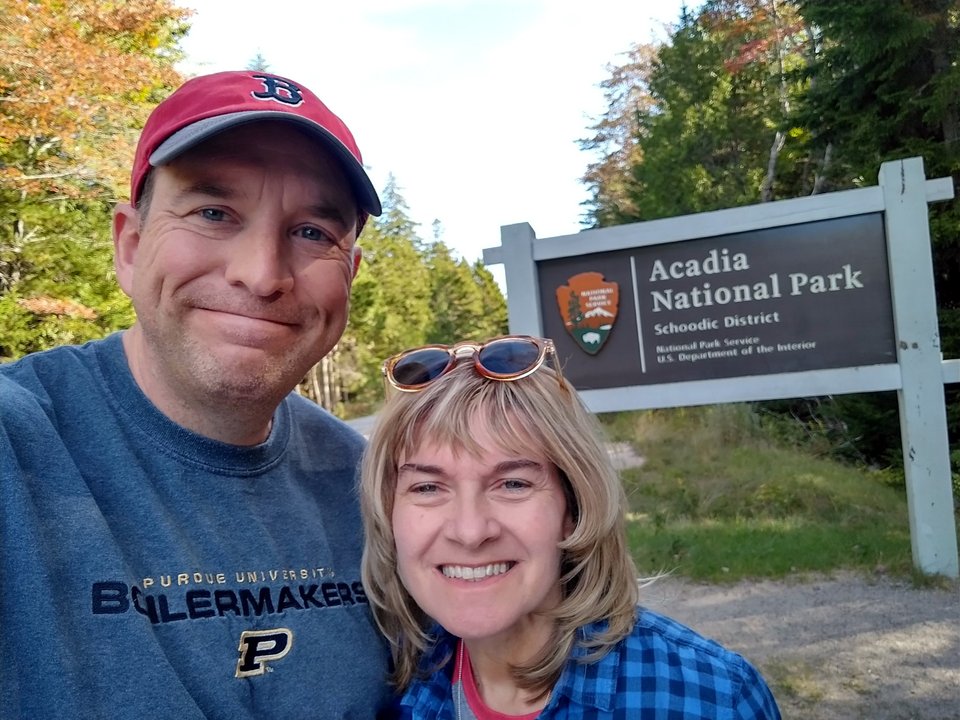