With apologies to Sammy Hagar…

And speaking of Sammy Hagar, the dude is 75 years old and still killing it.

Apparently good clean living is not required after all. We should all hope to still be rocking like that at 75 years old!

Anyway, back to me. My dad (and my mother-in-law) both failed to survive their 54th trips around the sun. So that particular year has always been a little foreboding, and I’m happy to have made it all the way around Sol to start the next trip.

It was a good year. We did a couple of really great camping trips to Niagara Falls / Western NY, and Acadia National Park. We’ve now spent 100 nights camping since we bought the camper in June 2020. So at 33 nights per year we are spending almost 10% of our time camping, or about 15% of camping season camping. Now to work on getting that percentage higher! My job is portable, so in theory I could work from a campground. However, internet connectivity at the places we want to camp is generally not conducive to being productive online. I’ve thought about finding some cool mountain towns with co-working facilities that would allow us to camp for a couple of weeks at a time, with me working from the co-working places during the day. Maybe we’ll try that next summer.

One thing I’ve noticed is that my brain is not keeping up with my chronological age. My brain still thinks it’s 30, and that leads me to do stuff like going skiing for the first time at age 54, or take on class V rapids, or take a road trip for a rock concert. The good news is I managed to do all the above without hurting myself. I also stared down my fear of heights at Acadia by completing the Beehive trail, and had an absolute blast doing it. I am convinced I can handle Angel’s Landing at Zion National Park, and if all goes according to plan, I’ll get the chance to prove that next Fall.

So what’s next for me? More of the same, more or less. The holidays this year will be spent quietly, at home. We are planning a week long camping trip up the Natchez Trace in the Spring, starting in Natchez, MS. and ending near Nashville. I’m not sure if we’ll spend any time in Nashville or not. I visited the city back in 2018 and I’m kind of over the crowded honky-tonk scene. In the fall we are planning to fly out west and rent a CamperVan to explore the Grand Canyon and the National Parks in Southern Utah. In between those trips will be a lot of local weekend camping, because that is what we do now.

Now that we’ve decided to settle in Richmond I should also probably get off my ass and buy a house. But renting is so easy, and means I never have stuff to do on a weekend that might interfere with camping trips. A guy has to have his priorities, right? Fun in the woods is more important to me than real estate equity. Nobody ever dies wishing they had spent more time on home maintenance.

Well, maybe the guy that died in a preventable home fire…

Us, last weekend. I don't act my age, and hopefully I don't look my age either. BTW, we were headed out to an 80s tribute concert. We don't dress this way all the time. Although I will admit to doing my entire look from stuff I had in the closet. 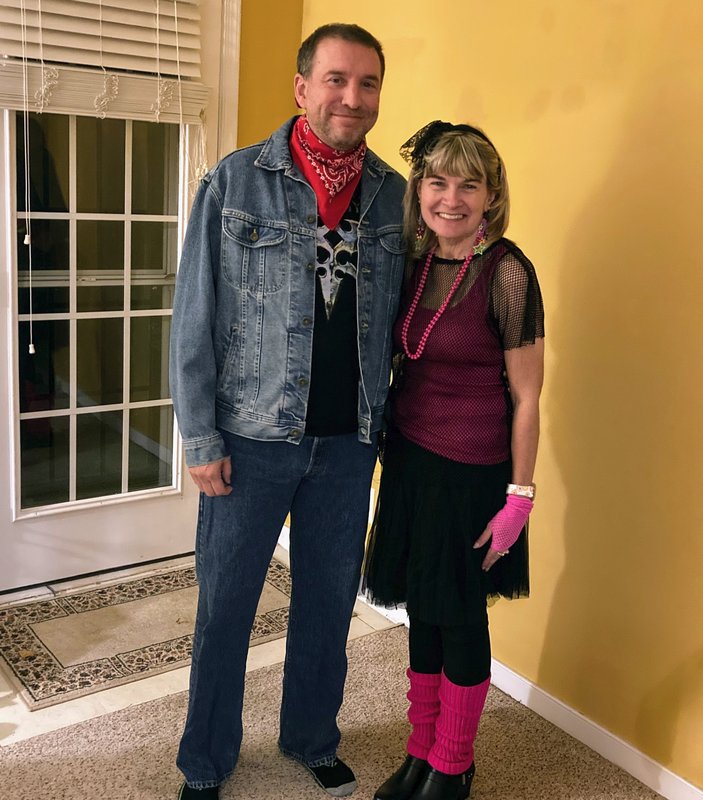