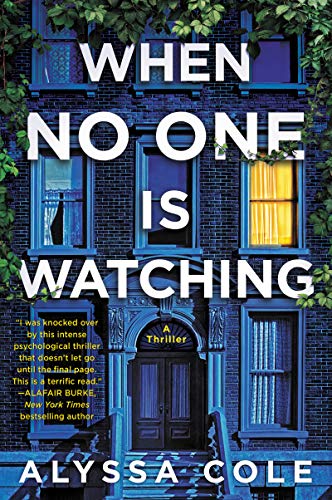 When No One Is Watching by Alyssa Cole is promoted as a thriller, and it does eventually get there, but it's a slow burn for the first 60% of the book. Then it blows up quickly and you won't be able to put it down.

Sydney returns to her Brooklyn neighborhood from Seattle to help her aging mom, and to start over after a failed marriage that was punctuated by emotional abuse. Back in Brooklyn she sees things changing - gentrifying at a rapid rate. Maybe too rapidly. Could this much change be natural economic forces at work, or is something more sinister and coordinated happening? The story takes a wild turn when it really gets going towards the end of the book, but I won't spoil it for you.

The entire story is built on a slow simmer of racism and white privilege, with the story told in alternating chapters from the point-of-view of Sydney and her white dude neighbor Theo. I wonder if I found the first half of the book a bit slow because I'm a white dude, so I have no basis to identify with what Sydney is feeling watching the rapid changes around her while trying to not to fall into conspiracy thinking, even though African Americans very clearly have very good reason to default to racism to explain just about everything. They'll be right way more often than when they are wrong with that assumption.

Have something to say? Hit me up via email.