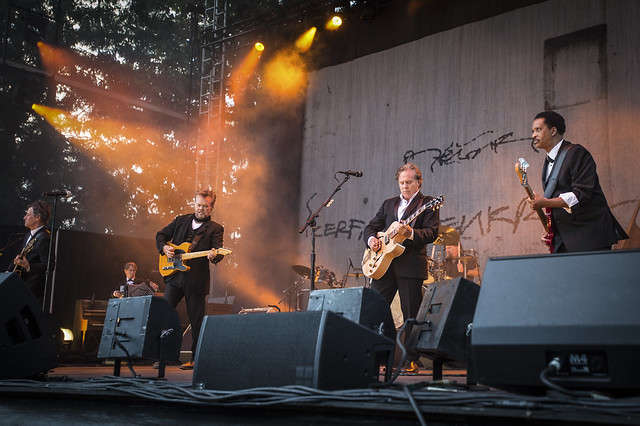 My two previous attempts to see John Mellencamp ended with canceled concerts and life threatening health issues for Mellencamp in one case, and a band member in the other case. He walked off the stage in apparent good health after the show last night, so my conscious is clear. He survived me attending a concert :)

I didn't have super high expectations going in. I was expecting Mellencamp to play it pretty straight and plow through the set with little embellishment. I couldn't have been more off base. Instead, he screwed with the arrangement on just about every song from his catalog, resulting in one of the best concerts I've seen.

The show started with Carlene Carter (June's daughter / Johnny Cash's step-daughter) doing a short set. I didn't actually see her set, as we were sitting out on the lawn hanging out with friends. Wolf Trap is the only venue I know of that allows you to bring your own food and booze in, but it has to stay out on the lawn area. So pre-concert is a 7000 person tailgate party on the lawn, which is exactly as much fun as it sounds like.

Following Carlene was Emmylou Harris. I can't actually name a single Emmylou song, but I recognize greatness when I hear it. We made it to our seats about the midpoint of her set. That's another thing, the sound system at Wolf Trap is one the best you'll find at a large outdoor venue. It's crystal clear. Wolf Trap is a national park, the country's only national park dedicated to the performing arts. Great venue, great sound system, bring your own food and booze. And people think government can't do anything right.

As alluded to earlier, Mellencamp's set exceeded my expectations in every way.

He introduced Jack and Diane as a song he only plays because we want to hear it. I don't think he was kidding. But even John Mellencamp has to feed the commercial beast. He didn't play Hurts So Good though.